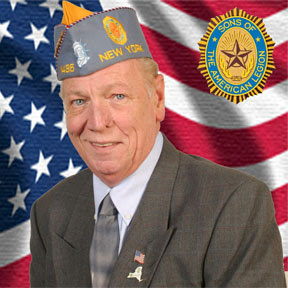 John’s eligibility is through his Father, John, who served in Germany and France, in the Army during WWII.

John, has held the following offices in the Sons of The American Legion, as Squadron Commander, Squadron Treasurer 4 years, County Executive Committee, District Commander, of 2 & 10, and a 2 year term as Detachment Vice Commander, Districts 2 & 10 and also served on the Public Relations Commission. He was also awarded an Honorary Life Membership by members of his Squadron. During his tenure in the Sons, he help establish the 2nd District, and both Kings and Richmond Counties. He is also a dual member, serving over 33 years as a member of The American Legion, Department of New York. John is a Veteran of the Viet Nam War Era, and served 6 years in the Air Force, serving Stateside and at Headquarters 3rd Air Force, (England) and USAFE.

On a Community Level, he served his community as being President of the Local Board of Trade, Director in the Local Civic Assoc., an Elected Member on the NYC Community Board 18, and member of the Lyons & Kiwanis’s Clubs.

He was employed and retired from the Human Resources Division of the Department of Veterans Administration, and currently owns a Gift Shoppe is his own neighborhood.

John and Regina have been together for 32 years, and both have supported the Legion, Auxiliary, and Sons.

John is looking forward to representing the Detachment of New York, sharing information and spreading the Legion Family values throughout the Great State of New York.
Posted by VolneyVet at 11:41 AM