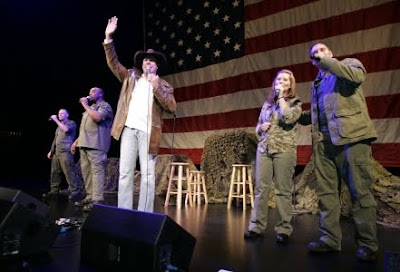 Michael Peterson and 4TROOPS perfrom in front of a crowd of 2,000 at the Milwaukee Theater during The American Legion National Convention. Photo by James V. Carroll
Country music star Michael Peterson and 4TROOPS, a quartet of Iraq and Afghanistan veterans and an official vocal group of The American Legion, entertained a crowd of 2,000 Monday evening at the Milwaukee Theater. The free concert was open to convention attendees and the general public as a way to raise financial support for The American Legion Legacy Scholarship Fund through the performers CD sales.

The Legacy Scholarship's mission is to ensure that children, whose parents died while on active military duty on or after Sept. 11, 2001, receive the opportunity to attend college. And through their musical talent, Peterson and 4TROOPS helped the Legacy scholarship meet its mission.
Besides CD sales from Peterson and 4TROOPS, a cash reception was also held following the concert to benefit the Legacy Scholarship. And the performers gave back to many of the audience members for their scholarship support by staying well after the concert to sign autographs and converse with them.

Additionally, both Peterson and 4TROOPS perform hits to Legionnaires in the United States and troops stationed in Iraq throughout the year as a way to support the U.S. military and military families.
Click here to view more photos from the concert.
Posted by VolneyVet at 8:48 PM