The Oswego County American Legion MEETING scheduled for Parish Post 601 at 8 PM tonight February 20th HAS BEEN CANCELLED by the Oswego County Executive Committee due to winter weather conditions.

Posted by VolneyVet at 12:24 PM No comments: 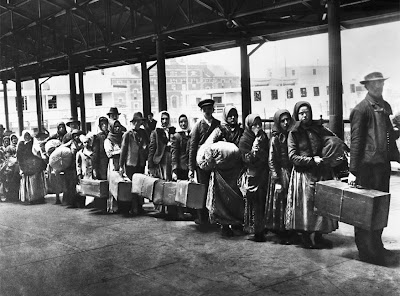 New Immigrants This is a very good letter to the editor. This woman made some good points.. For some reason, people have difficulty structuring their arguments when arguing against supporting the currently proposed immigration revisions. This lady made the argument pretty simple. NOT printed in the Orange County Paper...................

Newspapers simply won't publish letters to the editor which they either deem politically incorrect (read below) or which does not agree with the philosophy they're pushing on the public. This woman wrote a great letter to the editor that should have been published; but, with your help it will get published via cyberspace!

From: "David LaBonte" My wife, Rosemary, wrote a wonderful letter to the editor of the OC Register which, of course, was not printed. So, I decided to "print" it myself by sending it out on the Internet. Pass it along if you feel so inclined. Written in response to a series of letters to the editor in the Orange County Register:

Dear Editor: So many letter writers have based their arguments on how this land is made up of immigrants. Ernie Lujan for one, suggests we should tear down the Statue of Liberty because the people now in question aren't being treated the same as those who passed through Ellis Island and other ports of entry.

Maybe we should turn to our history books and point out to people like Mr. Lujan why today's American is not willing to accept this new kind of immigrant any longer. Back in 1900 when there was a rush from all areas of Europe to come to the United States, people had to get off a ship and stand in a long line in New York and be documented. Some would even get down on their hands and knees and kiss the ground. They made a pledge to uphold the laws and support their new country in good and bad times. They made learning English a primary rule in their new American households and some even changed their names to blend in with their new home.

They had waved good bye to their birth place to give their children a new life and did everything in their power to help their children assimilate into one culture. Nothing was handed to them. No free lunches, no welfare, no labor laws to protect them. All they had were the skills and craftsmanship they had brought with them to trade for a future of prosperity.

Most of their children came of age when World War II broke out. My fought alongside men whose parents had come straight over from Germany , Italy , France and Japan . None of these 1st generation Americans ever gave any thought about what country their parents had
come from. They were Americans fighting Hitler, Mussolini and the Emperor of Japan . They were defending the United States of America as one people.

When we liberated France , no one in those villages were looking for the French-American or the German American or the Irish American. The people of France saw only Americans. And we carried one flag that represented one country. Not one of those immigrant sons would have thought about picking up another country's flag and waving it to represent who they were. It would have been a disgrace to their parents who had sacrificed so much to be here. These immigrants truly knew what it meant to be an American. They stirred the melting pot into one red, white and blue bowl.

And here we are with a new kind of immigrant who wants the same rights and privileges. Only they want to achieve it by playing with a different set of rules, one that includes the entitlement card and a guarantee of being faithful to their mother country. I'm sorry, that's not what being an American is all about. I believe that the immigrants who landed on Ellis Island in the early 1900's deserve better than that for all the toil, hard work and sacrifice in raising future generations to create a land that has become a beacon for those legally searching for a better life. I think they would be appalled that they are being used as an example by those waving foreign country flags.

And for that suggestion about taking down the Statue of Liberty , it happens to mean a lot to the citizens who are voting on the immigration bill. I wouldn't start talking about dismantling the United States just yet.

KEEP THIS LETTER MOVING. FOR THE WRONG THINGS TO PREVAIL THE RIGHTFUL MAJORITY NEEDS ONLY TO REMAIN COMPLACENT AND QUIET!! LET THIS NEVER HAPPEN!!

I sincerely hope this letter gets read by millions of people all across the nation!! 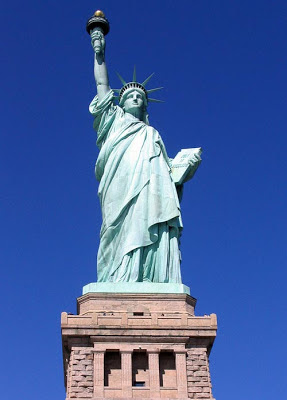 Posted by VolneyVet at 9:55 PM No comments:

Had a super scalloped potato and ham dinner with family and our auxiliary friends at the Oswego Post... 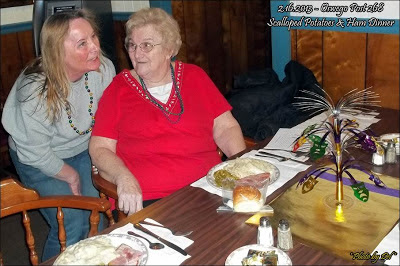 You don't know what you're missing if you haven't had dinner at the Oswego Post at their monthly Saturday afternoon repast. The Auxiliary girls do an excellent job of preparing and delivering to many elderly citizens in nursing homes in the area.

They always welcome take-out orders, of course, and they are really affordable as well.

Scheduled next for March 16th will be a Spaghetti and Meatball Dinner complete with all the trimmings as usual. Surely I won't miss that one if I can help it. 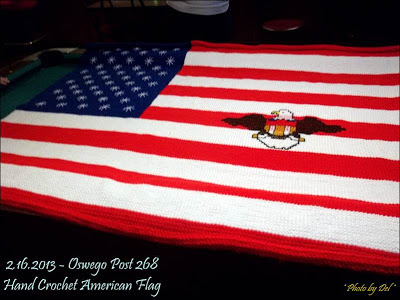 Pictured above is a hand crochet American
Flag which a member made. A truly
beautiful, full-size Old Glory!
Simply BEAUTIFUL!

Posted by VolneyVet at 3:28 PM No comments: 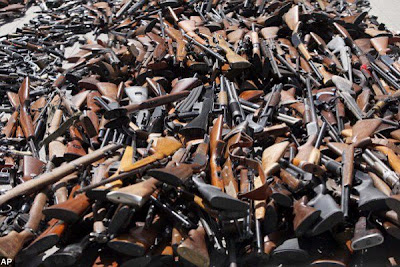 Here's a thought to warm some of your hearts....
From: Ed Chenel, A police officer in Australia

Hi Yanks, I thought you all would like to see the real
figures from Down Under.

It has now been 12 months since gun owners in Australia were forced by a new law to
surrender 640,381 personal firearms to be destroyed by our own
government, a program costing Australia taxpayers
more than $500 million dollars.

In the state of Victoria.....
lone, homicides with firearms are now up 300 percent.(Note that
while the law-abiding citizens turned them in, the criminals did not
and criminals still possess their guns!)
While figures over the previous 25 years showed a steady
decrease in armed robbery with firearms, this has changed drastically upward in the past 12 months, since the criminals now are guaranteed that their prey is unarmed.There has also been a dramatic increase in break-ins andassaults of the elderly, while the resident is at home.

Australian politicians are at a loss to explain how public
safety has decreased, after such monumental effort and expense was expended in 'successfully ridding Australian society of guns....' You won't see this on the American evening news or hear your governor or members of the State Assembly disseminating this information.

The Australian experience speaks for itself. Guns in the
hands of honest citizens save lives and property and, yes, gun-control laws affect only the law-abiding citizens.

Take note Americans, before it's too late!
Will you be one of the sheep to turn yours in?
WHY? You will need it.


DON'T BE A MEMBER OF THE SILENT MAJORITY.

BE ONE OF THE VOCAL MINORITY WHO WON 'T STAND FOR NONSENSE
Posted by VolneyVet at 3:05 PM No comments: