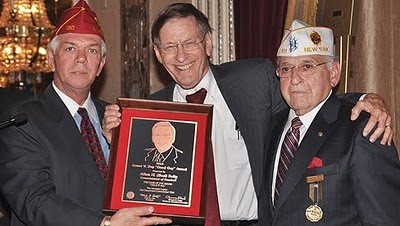 In addition to his many well-received and profitable revisions to Major League Baseball, Selig is active in Milwaukee in many humanitarian causes and community projects.
"I've often said that baseball is a social institution with important social responsibilities, and I hope that the last 18 years as commissioner and the 25 years before that as the owner of the Milwaukee Brewers, that that's always been exhibited," Selig said. "The values of America and the values of baseball are really intertwined. You could fill a 25-man roster with the values that bind our nation with the national pastime. It's the thing I'm proudest of, frankly, in being in baseball."

Selig praised The American Legion for its commitment to youth through American Legion Baseball. In place since 1925, the program is the Legion's largest youth program and has produced more than 50 Baseball Hall of Fame inductees. Selig himself has a connection to Legion Baseball: 60 years ago, Selig's father was involved with a Legion team that included Harvey Keen, a former MLB standout player and manager.

"I'm not only grateful for this honor; I'm grateful for what The American Legion does for baseball," Selig said. "You have made it possible for hundreds of thousands of players and nearly 5,000 teams to learn these American values through our national pastime. Since the program began 85 years ago, more than 10 million have participated. That's an amazing number - 10 million children.