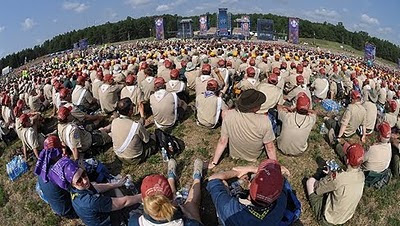 Scouts listen to Defense Secretary Robert Gates
speak on Wednesday. Photo by James V. Carroll
Secretary of Defense Robert Gates stood before more than 45,000 Boy Scouts Wednesday and urged them to pursue their dreams - America's standing in the world depends on it, he said. He also said Scouting has played an important part in his life.

"Scouting has always been a part of my life and my family's life," said Gates, who earned the rank of Eagle Scout 52 years ago at age 15. "Earning Eagle Scout was the only thing I had done in my life that made me believe I could make a difference. It was the first thing I had done that told me I might be different because I worked harder, was more determined, more goal oriented, and more persistent than others."

Gates said Scouting has set the boys and young men "on the path to becoming a man of integrity and decency, a man of moral courage, a man unafraid of hard work, a man of strong character - the kind of person who built this country and made it the greatest democracy and greatest economic powerhouse in the history of the world.

"I am here today because I believe in the extraordinary power of Scouting to be a force for good in a community and in the lives of its boys and young men."

Scouting will produce a new generation of leaders that will assure that America will continue to be a beacon of hope and decency and justice for the rest of the world, Gates concluded.
Later in the day, American Legion National Commander Clarence Hill sat and dined with a number of Florida Scouts and delivered a similar message.

The American Legion recently became No. 1 in terms of the number of Scout troops sponsored by civic organizations, Hill added.