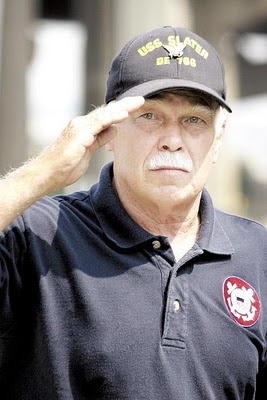 By Katie Nowak
The Record
ALBANY — Veterans and lawmakers alike came together Wednesday morning to celebrate the 220th anniversary of the U.S. Coast Guard with a ceremony on the USS Slater.

County Executive Mike Breslin issued a proclamation recognizing the military branch’s milestone, lauding its distinguished history and contributions to our country’s freedoms and safety since its founding in 1790.

“Throughout its 220 year history the Coast Guard has lived up to its motto of ‘Always Ready’ with more than a million lives saved and untold disasters prevented since its founding, (and its) role in preserving the American way of life is perhaps the most overlooked of military achievements,” Breslin said. 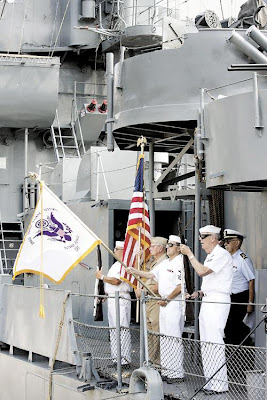 Richard Walker is one of seven Coast Guard veterans who volunteer to give tours of the USS Slater, and has been doing so since 1998. He served four years of active duty during his 1965-1981 stint as a member of the Coast Guard, and spent time in the reserves at the former port office in Albany.

Walker echoed Breslin’s sentiments that the Coast Guard has been overlooked by most of the general public as the forgotten branch of the U.S. military. He recalled the day of President Lyndon B. Johnson’s inauguration when a Coast Guard color guard took part in the parade, and the television announcers incorrectly identified the group as members of the Navy.

He was one of veterans at the Slater who helped organize Wednesday’s ceremony, an annual celebration they began holding three years ago.

“I started talking to other Coast Guard volunteers, and saying we ought to do something for better identification, and we got this idea of having a Coast Guard day celebration, so people would know that there were Coast Guard people involved with destroyer escorts, besides we who were here patching it up and putting it back together,” he said.

The Slater was one of 351 Navy ships that had Coast Guard crew onboard during World War II, a fact that not many people know, he added.
Posted by VolneyVet at 11:33 AM