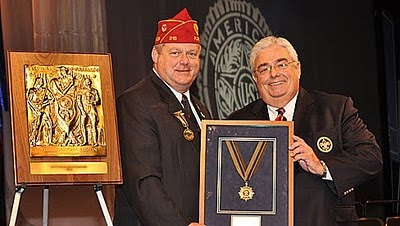 Celebrating 100 years of commitment to youth this year, the Boy Scouts organization was awarded the Distinguished Service Medal by The American Legion. The Boy Scouts was chartered by Chicago publisher W.D. Boyce on Feb. 8, 1910, and the Legion has been by its side for much of the way.

"In 2009, service projects were conducted by more than 2.8million youth members and more than 1.1 million volunteers. Nearly 37 million service hours were given by members of this great organization last year in projects ranging from community clean-ups to military appreciation. Simply put, the Scouts stand for God, country and service."

The American Legion has officially supported the Boy Scouts since the first national convention in 1919, making it the first youth activity recognized by Legionnaires. The Boy Scouts of America is the nation's foremost youth program of character development and values-based leadership training. The organization is composed of 2.7 million youth members between the ages of 7 and 20, 1.1 million volunteers and nearly 300 local councils throughout the United States and its territories.

In addition to chartering scouting units, each year The American Legion provides a scholarship of $10,000 to the Eagle Scout of the Year, and scholarships of $2,500 to each of three runner-up candidates.

The award was presented on the first day of The American Legion's 92nd National Convention in Milwaukee, Wis., before an audience of nearly 5,000 delegates.
Posted by VolneyVet at 7:12 PM