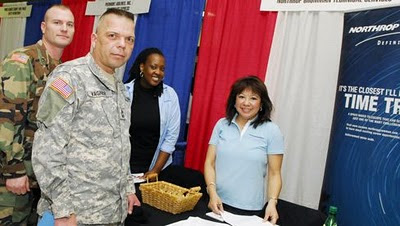 (Left to Right) SFC Thomas Cross and MSG Bryan Wagner
speak with Ardina Fox and Bella Taylor, recruiters for
Northrop Grumman Technical Services. Noel St. John
As one of its founding pillars, The American Legion has long been committed to helping separating servicemembers reintegrate into civilian life. Included in that is a dedication to help veterans find rewarding jobs and business opportunities. A Legion commitment that dates back to World War I, career support for veterans has evolved in recent decades, and nearly 140 Legion-affiliated events – business workshops, job fairs and career expos – are conducted each year.

In a struggling economy that has been particularly tough on veterans, the need to find employment for the men and women who served our country has never been greater. That’s why The American Legion is trying to greatly increase the number of veteran career events it produces or supports. Pepsi’s Refresh Project contest presents the perfect opportunity.

The Legion will re-enter the Pepsi Refresh Project contest for the month of August with its veterans career fairs initiative as the beneficiary. Voting officially begins Aug. 1 at 12:01 a.m. EST. The contest, which the Legion’s Operation Comfort Warriors program won in February, will award a $250,000 grant to the first-place finisher. Funds from the February award are still being used to give wounded warriors items like sweatsuits, DVD players, therapeutic athletic equipment and duffle bags. Should the Legion win again, the money will be used to fund nearly 1,000 career fairs, which will provide veterans, service members and their families with everything from on-site job interviews to resume-writing assistance. It costs nothing to cast a daily vote for the Legion’s job fairs initiative through the month.

Undoubtedly, the need to employ veterans has never been greater. An estimated one-fifth of the nation’s homeless population has a background of military service. Around 107,000 veterans are on the street on any given night and twice as many experience a similar hardship at some point each year. Many other veterans, particularly those who are ages 18 to 24, are considered near homeless or at risk of it because of income-related issues.

The unemployment numbers for former service members, particularly young ones, are equally concerning. The unemployment rate for veterans of Iraq and Afghanistan swelled to 21.1 percent last year - up 7 percent from 2008. The number was also well above the 16.6-percent unemployment rate for non-veterans of roughly the same ages, 18 to 24.
Visit the Pepsi Refresh Web site and cast your vote daily. Spread the news of our voting efforts with social media tools like Twitter and Facebook. Help us help the men and women have served so unselfishly!
Posted by VolneyVet at 11:48 AM