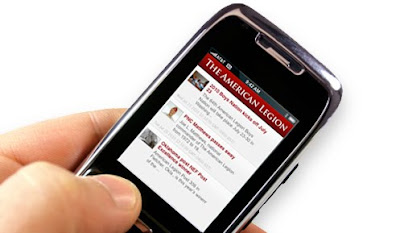 Visiting The American Legion on a mobile phone becomes easier this week. A new mobile-phone application for the Apple iPhone and a new display for the BlackBerry (and other mobile phones) offer streamlined news, Twitter updates and other information for Legionnaires on the go.

BlackBerry (and other mobile phone) users can simply enter mobile.legion.org into the browsers on their phones, and they will be automatically directed to an easy-to-read mobile-phone version of The American Legion National Headquarters Web site. iPhone users can download the free American Legion application from the Apple App Store, accessible from any iPhone. Click here to view on App Store

News and information are updated often during the course of a day, and photos can be viewed. The applications also offer the ability for users to forward stories by e-mail and post on Twitter.
Posted by VolneyVet at 1:10 PM