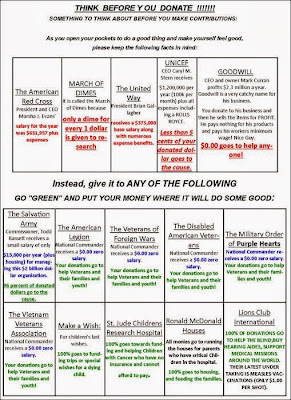 Posted by VolneyVet at 5:51 PM No comments:

Legion to Senate: Do not reduce COLA for veterans
WASHINGTON (December 14, 2013) --American Legion National Commander Daniel M. Dellinger is calling upon the U.S. Senate to remove a provision from the Bipartisan Budget Act of 2013 that would reduce cost-of-living adjustments (COLA) for military veterans aged 18-62.
“How inappropriate is it for Congress to pass a bill that will reduce the quality of life for about a million of our veterans, then go home and celebrate Christmas with their families?” Dellinger said. “The Senate is going to pass the House bill with bad provisions, just for the sake of looking bipartisan. This is a horrible idea, and if the law passes, the Legion will do everything in its power to repeal those sections that are aimed at harming veterans and their families.
“Taking away COLA benefits from our veterans will save the government $6 billion over 10 years. Congress can save that amount of money in so many different ways. They have plenty of other options to find another $6 billion to cut. Why must they force our country’s retired veterans – many of them disabled – to make do with less? The American Legion is horrified that the Senate may pass a bill today that is so unfair to those Americans who have served honorably in uniform.”
While several bills have already been written that seek to restore military retirees’ pay to the same COLA that everyone else nationwide will receive, American Legion Legislative Director Louis Celli said “there is a huge difference between passing a bill and introducing one. The Legion is concerned that, once signed by the president, an attempt to repeal the COLA provision later will meet with too much opposition because Congress won’t be able to agree on replacement funding.”
Dellinger said he is “absolutely sickened by the thought that the only group targeted by the budget bill to lose direct income is the American veteran, including veterans who have been medically retired from military service due to catastrophic injuries sustained in battle.”
Posted by VolneyVet at 5:50 PM No comments: