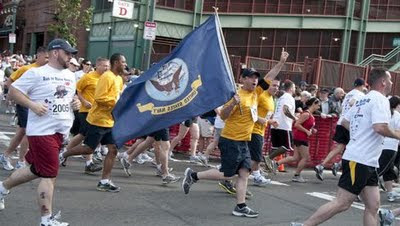 On May 22 at 8:00 a.m., 2,500 people will have the chance in a lifetime to run across home plate at Fenway Park in Boston, all while supporting local veterans and their families. The Run to Home Base is a 9K (5.6 miles) fund-raising event that benefits the Red Sox Foundation and the Massachusetts General Hospital Home Base Program, which provides needed services to veterans returning from Iraq or Afghanistan with TBI or combat-related stress.
Runners will enjoy a scenic tour throughout Boston and a photo finish at home plate in historic Fenway Park.
Registration is open to the first 2,500 participants who meet the fundraising commitment of $1,000 before or by May 12. Each runner will create a fundrasiing web page to receive support from family and friends to help in the financial efforts.
And for non-runners or those who do not live nearby to attend the race, the opportunity to still be a part of the event can be achieved by donating to the worthy cause or by becoming a virtual runner. A virtual runner will also create a fund-raising page, but the minimum donation they must meet is only $25.
For more information on the Run to Home Base 9K or to register, visit www.runtohomebase.org.
Posted by VolneyVet at 12:44 PM No comments:

WHAT WE'RE FIGHTING FOR 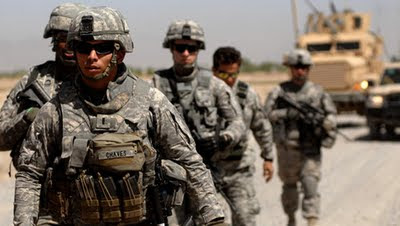 The war in Afghanistan has gone on for nearly 10 years now, claiming some 1,460 American lives. It's no wonder the American people have tired of the war and turned against it. In fact, a recent CNN poll reveals that 58 percent of Americans oppose the war, and 54 percent think the United States should no longer be involved in Afghanistan. To be sure, Americans have a right to say that they have done enough for Afghanistan. A decade is a long time to sacrifice for a faraway land. But given the nature of the enemy in Afghanistan - not to mention what Afghanistan spawned 10 Septembers ago - there are few places on earth more deserving of the American people's help, and the American military's attention.
Much of what the Taliban did while in power, and continue to do while trying to reclaim power, is too gruesome to describe here. The Taliban employed beheadings, mutilations, summary executions and the like to control the Afghan people in the 1990s. But a brief overview of the group's inhumanity may help to explain why some of us continue to support the U.S. military's herculean efforts in Afghanistan.
First, we must never forget that it was the Taliban that provided sanctuary to al-Qaida, which used Afghanistan to plan and launch the 9/11 attacks. Depriving the enemy of this safe haven is the reason the War on Terror began in Afghanistan, and continues in Afghanistan, especially through efforts to build and strengthen the institutions of a post-Taliban government.
Second, the Taliban may claim religious piety, but the reality is that they are bereft of any religious enlightenment. This enemy is as brutal and barbaric as anything Americans have faced in the past. For example:
- The Taliban have launched poison-gas attacks against schools for girls, using substances found in insecticides, herbicides, sarin and VX, to terrify, sicken and murder people for the crime of wanting to learn.
- When they're not poisoning schools, they're burning them. The Taliban set fire to 60 schools in 2010.
- Taliban field regulations, obtained by NATO, forbid working as a teacher "under the current puppet regime." Any teacher who refuses to quit his or her job, according to Taliban rules, "must be beaten." If someone teaches "contrary to the principles of Islam, the district commander or a group leader must kill him."
- The Taliban are using children as human shields and time bombs, some as young as 5. As the London Telegraph reports, children as young as 14 have carried out suicide-bomb attacks. The Taliban use children to carry weapons, identify allied commanding officers for Taliban snipers, and plant IEDs. 1 in 5 roadside bombs in the city of Sangin, for instance, is planted by children, according to the British military. "They know that we won't engage the kids," said one British commando.
The U.N. reports that Afghan civilian casualties were up 31 percent in 2010, and places the blame squarely on "tactics of the Taliban and other anti-government elements (AGEs)." The Taliban's toll is falling heaviest on children, according to the U.N. "Among those killed or injured by the Taliban and other AGEs were 55 percent more children than in 2009."
Given this barbarity, it's no surprise that the Afghan people support the U.S.-led NATO effort to fight the Taliban and create a viable post-Taliban Afghanistan. According to polling conducted by ABC, 62 percent of Afghans support NATO forces, 75 percent say attacks against NATO forces are not justified, and only 6 percent of the country supports a return of the Taliban government.
"For Afghanistan to be able to survive," defense minister Abdul Rahim Wardak said during a recent meeting with Defense Secretary Robert Gates, "it will need your help beyond 2014."
Speaking to U.S. commanders in late 2009, Wardak explained why the war-weary Afghan people have not turned against the NATO mission: "Afghans have never seen you as occupiers, even though this has been the major focus of the enemy's propaganda campaign. Unlike the Russians, who imposed a government with an alien ideology, you enabled us to write a democratic constitution and choose our own government. Unlike the Russians, who destroyed our country, you came to rebuild."
Indeed, not only did the U.S. military liberate 26 million Afghans by closing the book on the medieval Taliban; it has also has laid the foundation for something better.
Backed by the muscle of the U.S. military, American relief agencies have built or renovated 640 health clinics, 680 schools and 4,000 miles of road to connect the fragmented country of Afghanistan. USAID reports that some 6 million Afghan children are now in school, about 2 million of them girls, and more than 4.6 million Afghan refugees have returned home since 2001.
In other words, the American people and their military are offering Afghanistan the very opposite of what the Taliban promises. Let's hope the Afghan people seize the opportunity - and soon, because America is growing impatient.
Posted by VolneyVet at 12:04 PM No comments: 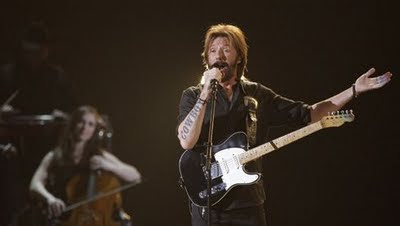 Ronnie Dunn performs at the 46th Annual Academy of
Country Music Awards in Las Vegas on
Sunday, April 3, 2011. AP Photo/Julie Jacobson
For months, Shelby, N.C., locals and many others have anxiously anticipated the announcement of the country music artist who will be performing prior to the start of the 2011 American Legion World Series games. That wait is over.

Grammy winner Ronnie Dunn, formerly of the duo Brooks & Dunn, will perform in front of 6,000 fans at the Cleveland County Fairgrounds in Shelby on Aug. 11. And at the moment, plans are being finalized for another artist to be the opener. More importantly, Dunn’s performance is just the beginning to the exciting, unforgettable events Shelby’s Legion Baseball Committee has planned for coaches, players, family members and locals during the World Series, Aug. 12-16.

To prepare for the series and properly accommodate it, Shelby has spent the last six months transforming Keeter Stadium into a state-of-the-art ballpark. However, a few upgrades go beyond the stadium and into the quaint, hospitable town of Shelby.

The outdated, above-ground dugouts were first to undergo major renovation, and after months of construction, Keeter Stadium has two 12-by-70 sunken dugouts that feature rails, storage lights, a restroom and phone lines with direct access to the press box. With the dugouts complete, foundation has recently been laid for an additional 500 seats to be added above each dugout, increasing the ballparks seating capacity from 4,000 to 5,000.

Foundation has also been laid for the new 1,800 square-foot World Series headquarters building that will house national staff. This past December, Lowe’s Home Improvement donated $300,000 for the construction of the building, which will be located adjacent to the field. And to keep Legion staff and others updated on the local weather, Internet scoring and live webcast of each game, a 50-inch monitor will be housed in the World Series headquarters building along with a 42-inch one in the press box.

As for upgrades beyond the stadium, signs now hang below 10 of the “Welcome to Shelby City Limit” signs that run along highways and streets entering into the town. The new signs read: “Home of American Legion World Series.” You can see photos of the signs, as well as stadium renovations, by clicking here to visit Shelby’s Legion World Series Facebook page. And for information on World Series tickets, transportation, accommodations, the latest news and much more, visit www.clevelandcountybaseball.com.
Posted by VolneyVet at 8:11 PM No comments: 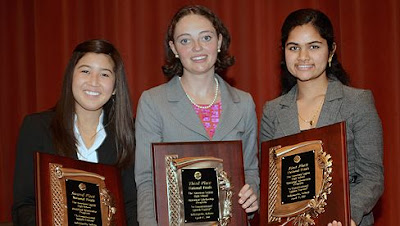 Left to right: Grace Pyo, Anastasia Kaiser and Anisha Gururaj.
Photo by James V. Carroll
The top three finalists for the 2011 American Legion High School Oratorical Scholarship Program, “A Constitutional Speech Contest,” gave their oration and assigned topic speech on stage Sunday morning in front of an auditorium filled with family, friends, judges, Legionnaires and other distinguished guests. The live webcast of the championship finals, aired on www.legion.org, captured an audience clear from India thanks to the finalist who took home the 74th Oratorical crown.

For the championship finals, Gururaj, Pyo and Kaiser presented their eight- to 10-minute oration in front of seven new judges dispersed throughout the audience. Afterward, they spoke three to five minutes on an assigned topic, which was Amendment 10 and drawn randomly by guest speaker Jimmie Foster, The American Legion's national commander.

Visit www.legion.org Monday to read the winning oration and hear from Anisha Gururaj on being crowned the 74th American Legion Oratorical champion.

Posted by VolneyVet at 9:17 PM No comments:

BALLAD OF THE GREEN BERET

This is an oldy-but-goody from the past. SSgt Barry Sadler sings his song in honor of the elite Green Beret.

This is his rendition of the "Ballad of the Green Beret" and worth a listen.

Posted by VolneyVet at 8:52 PM No comments:


PROUD TO HONOR THOSE WHO HAVE SERVED AND ARE SERVING 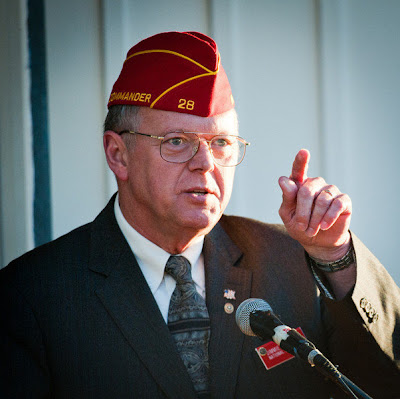 Click HERE for brief video of the program by the local TV station.


Last November, LaFargeville Central School was still under construction and was unable to commemorate Veteran's Day. This week on Military Matters, we go to the school for a Veteran's Day ceremony in April in conjunction with the National Commander Jimmie Foster’s visitation to the 5th District American Legion on April 13, 2011. The school has a small enrollment of 600 strong, pre-k to 12 building.
Posted by VolneyVet at 8:40 PM No comments: 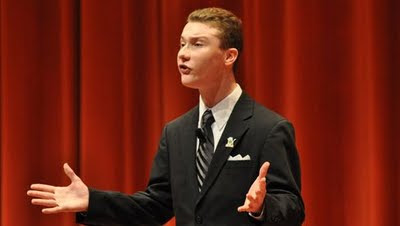