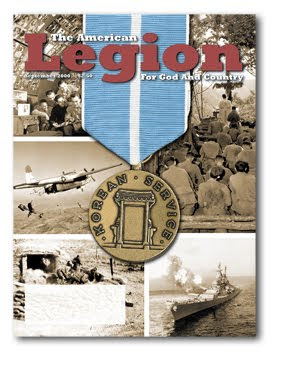 In the history of The American Legion Magazine, few issues were as popular as the September 2000 50th anniversary commemoration of the Korean War. Hundreds of extra copies were ordered. The number in the archives at National Headquarters dwindled to fewer than five. Within its pages are stories of heroism, captivity, travail and human interest. Many of the stories and photos for that issue were submitted by veterans of the war or their families. Writers and historians addressed the deeper meanings of the war, and two pages were devoted to Korean War humor, in a special edition of Parting Shots.
The American Legion Web site has returned this special issue of the magazine to readers.
Click here to read a digital version of that historic issue.
Posted by VolneyVet at 7:35 PM