NASC delegates learn about the Legion
By Cameran Erny - June 30, 2010 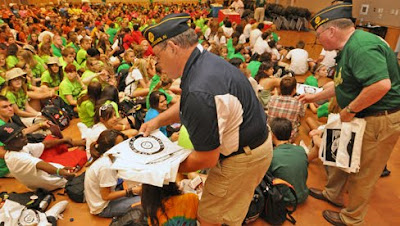 Originally, the delegates were to visit the outdoor American Legion Mall, which is located next to National Headquarters, to speak with Legion staff. However, due to high humidity and possible thunderstorms, the venue changed to a meeting room located in the IUPUI Campus Center.

Students piled into the meeting room to listen to a 15-minute overview of the Legion and its youth programs from Bill Pease, the Legion's Fundraising Division director and former Americanism/Children & Youth Division director. During the presentation, Pease asked students to raise their hand if they currently are or have been involved with the organization's youth programs. Numerous hands rose for Boy Scouts, Boys and Girls State, Boys Nation, Legion Baseball and the Oratorical Contest.

"I played American Legion Baseball for the D'iberville Warriors and loved it," said Leonard Bentz from Biloxi, Miss. "I will probably play again next year since this summer I got held back due to the oil spill. My father and I are driving our boat in the Back Bay looking for oil and wildlife. We report any oil and animals that we find, and then vessels rescue, clean and relocate the animals."

Throughout the meeting room, tables were set up that housed pamphlets on the Legion's youth programs, as well as material on flag etiquette and the organization's "Get Out the Vote" program. American Legion Children & Youth Division staff, along with local Legionnaires, manned the tables and spoke about the multiple programs with NASC delegates and answered questions the students had. After hearing about the Legion's opportunities, many delegates plan to participate in the programs of interest.

"I'm looking forward to getting home and applying for a few of the Legion's available scholarships, and maybe Girls State, because both programs seem great and like a good fit for me," said Amy Haskell from Westboro, Mass.

Overall, the meeting room was filled with energy and bright attire, as each student represented their state by wearing a colorful T-shirt with a witty slogan. For example, students from Boston wore green shirts that read "Kiss Me I'm Boston," while Nevada students wore blue shirts that read "Eat, Sleep, Student Council." Moreover, some students added accessories to their already flashy attire - students from New Orleans wore blue cowboy hats with yellow feathers attached that read "Saints Fever," and Oklahoma students wore red bandanas with the state name written across the front in white lettering.

Posted by VolneyVet at 4:10 PM