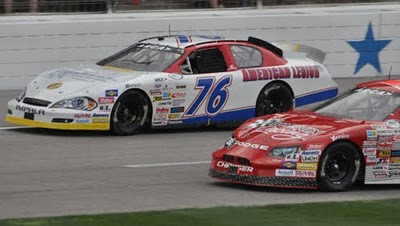 The American Legion/David Law Firm 76 Freedom will be in action
in Iowa this weekend. Photo by James V. Carroll
Jerick Johnson and The American Legion /David Law Firm 76 Freedom Car is in Iowa this weekend to compete in the ARCA Prairie Meadows 200 at Iowa Speedway - an .875-mile paved oval near Des Moines. Johnson enters the race 18th in ARCA championship points and third in Rookie Points. He is first in the Hard Charger category, having passed more cars than any driver this year.

"Last year was sort of bittersweet here at Iowa Speedway," Johnson said today. "We qualified ninth for the American Speed Association race, but the top nine cars were inverted after the pole winner drew the number nine, giving us the pole. We crashed the 76 Car after about 50 laps."

If Johnson is going to take the pole in the Prairie Meadows 200, he is going to have to do it on the track, not by the luck of the draw. Speed alone determines the starting position for all cars in the ARCA Racing Series presented by RE/MAX and Menards.

Fans unable to attend the race have an opportunity to greet Johnson and the entire Team Johnson Motorsports crew at the American Legion Post in Newton, Iowa from 6 p.m. to 9 p.m. tonight. Johnson and other ARCA drivers are also scheduled to sign autographs at an area casino Friday.
Posted by VolneyVet at 6:10 PM