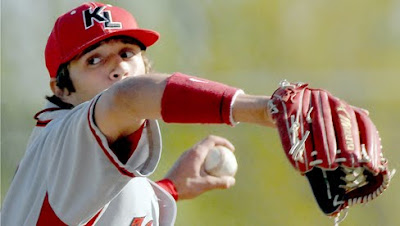 Kalispell Lakers' pitcher Joe Pistorese, 17, pitches in the first inning of his perfect game against the Glacier Twins in an AA American Legion Baseball game in Whitefish, Mont. Photo by Lido Vizzutti/Flathead Beacon
On May 25, 2010, the Montana Kalispell Lakers American Legion Baseball team kicked off the Western AA Conference season with a game against the local Glacier Twins. At the start of the game, Joe Pistorese, a 17-year-old pitcher for the Kalispell Lakers, stood on the pitching mound with one goal in sight — a win. But what Pistorese didn’t foresee was that he would be walking off the field with sweat-drenched clothes due to achieving his second no-hitter.

“I knew I was doing my job well, and I was focused on getting the win more than anything,” Pistorese said. “It felt great when I threw the last pitch to end the game, but I didn’t realize what I had done until I looked over at my coaches (Carl Hennell and Ryan Malmin) who were running the field with a cooler to dump on me.”

Pistorese pitched his first no-hitter last summer during his second season with the Kalispell Lakers — a rare success which the left-handed pitcher attributes to studying his competitors batting stance.

“Because I’ve grown up with most of the players, and I know how they bat, I’m always pretty confident with my pitching,” Pistorese said.

However, Pistorese’s confidence was tested during the bottom of the eighth inning with only one out. As a Glacier Twins player was at bat, the opposing team’s commentator announced to the crowd that Pistorese was pitching a perfect game. Immediately following the disruptive call,

Pistorese pitched three straight balls to the batter. But he wasn’t going to let the commentator jinx his pitching. Pistorese took a walk around the mound to clear his head and then fired three straight strikes.

“I couldn’t believe he (the commentator) did that,” Pistorese said. “After the game when I was being interviewed by the radio, I looked back at him when I was asked if anybody was talking about it (pitching a perfect game) in the dugout. Everybody in baseball knows you don’t talk about something like that when it’s happening.”

The nine-inning game consisted of Pistorese pitching a mixture of 80-mph fastballs and curveballs, allowing zero hits, walks and errors. “His curveball was my favorite pitch to call,” said Zach Brosten, a catcher for the Kalispell Lakers.

“He kept it low and it had a sharp break, and he threw it for strikes. It was nasty.”

As a result of Pistorese’s perfect pitching and his teammates great defense, the Kalispell Lakers defeated the Glacier Twins 8-0.

“I like the competition of Legion baseball,” he said. “I love my coaches as they treat me like a friend; it’s just a lot of fun.”
Posted by VolneyVet at 11:59 AM