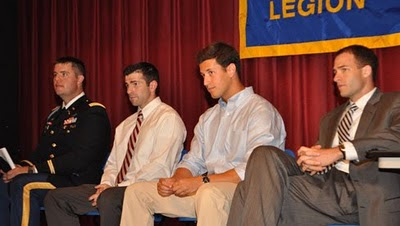 Boys Nation alumni, from left, Maj. Sean Morrow, Nathan Skelley, Michael Lang and Joel Leftwich wait to address the senators on Wednesday. Photo by Charlie Tucker
Alan Lance, a retired judge of the U.S. Court of Veterans Appeals and past American Legion National Commander, dressed in a black robe Wednesday morning in order to preside over the 2010 Boys Nation inauguration. All 98 senators convened in the Marymount University auditorium, where Lance swore into office Boys Nation President Charlie Brown and Vice President Alex Geiger. After the president and vice president delivered their remarks of appreciation, Lance conducted a question-and-answer session with the senators.
Immediately following the inauguration, the senators trekked to the gym for another senate session involving the passing of bills and resolutions. Vice president Alex Geiger presided over the session as bills were presented, debated and voted on amongst the four senate committees. To view bills and resolutions introduced by the senators, click here.

The bills and resolutions introduced are compiled and sent to the president of the United States shortly after the end of Boys Nation. They also become a permanent record of the program and are archived at The American Legion National Headquarters in Indianapolis.

For the afternoon, the senators left campus and headed to Washington to tour the American History Museum and the World War II Memorial.

A few popular exhibits inside the history museum included the 30-feet by 34-feet Star-Spangled Banner from 1814, the First Ladies inaugural gowns, the life of Abraham Lincoln, and photos, weapons and uniforms from the different war eras.

"I like the presidential exhibit because it gave a detailed background on all the presidents and their vital roles in our history," said Ryan Niedermair from Mandeville, La.

"I really enjoyed the tour on all the wars the U.S. has been involved in," said Aditya Rengaswamy from Troy, Mich. "The global perspective of everything the U.S. has done is amazing."

The World War II Memorial, which was dedicated on May 29, 2004, honors the 16 million soldiers who served in uniform and those who died fighting for freedom. The senators walked along a circular path that displayed 56 pillars commemorating those who united during the war - U.S. states, territories and the District of Columbia. Hanging from the pillars are wreaths of oat and wheat, which were two agriculture products essential to the nation's success with the global war effort.

A somber moment was felt among all 98 senators when they grasped what the World War II Memorial's Freedom Wall represented. The wall features 4,000 gold stars in honor of the more than 400,000 Americans who died fighting in the war. This was a reminder to the senators of the sacrifices the soldiers gave for freedom and individual rights.

To end the night, four Boys Nation alumni spoke to the senators about their experience with the program, how it impacted their lives and where they are now. The four men were Joel Leftwich, a legislative assistant for a U.S. senator; U.S. Army Major Sean Morrow; Nathan Skelley, an undergraduate from Cornell University who is pursuing his medical degree at Johns Hopkins School of Medicine; and Michael Lang, an attorney for the federal energy agency.

During their presentation, the alumni encouraged the senators to get involved and not to stress about holding office positions.

"Yes, elections are a big part of the program, but it's only one part of the entire week," Skelley said. "Try to get involved because there is more to the program than elections. Remember, it's a week that shapes a lifetime, but it's also a once in a lifetime opportunity."

A fascinating and proud moment for the senators was hearing from the alumni on how Boys Nation has brought them recognition among college professors and career professionals.
For example, during an interview at John Hopkins, Skelley was asked to share his Boys Nation experience because the interviewer was a Boys State alumnus but never made it to Boys Nation like he wanted to. For Major Morrow, academically his grades were not up to standards for the U.S. Military Academy at West Point. However, when they received his application and noticed that he was a Boys Nation alumnus, they knew he had the leadership skills to succeed and accepted his application.

"Hearing the four alumni speak on how Boys Nation has been instrumental in their education, life and careers was inspiring," said Colin Danly from Lake Forest, Ill. "Joel Leftwich gave us great advice in that we always need to challenge ourselves and that the process and the learning experience of Boys Nation is what we need take with us now and five, 10 years from now."
Posted by VolneyVet at 10:45 PM