Jamboree honors a century of scouting
The American Legion - July 22, 2010 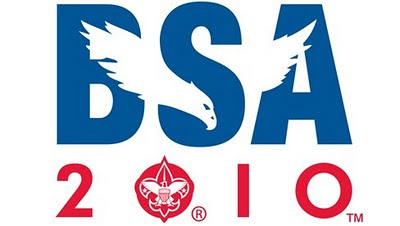 Boy Scouts of America has been celebrating its 100th anniversary throughout 2010. The year of commemoration comes to a climax at the National Jamboree July 26 to Aug. 4 at Fort A.P. Hill in Virginia.

Thousands of Scouts from across the country will gather to enrich their lives, reinforce Scouting skills, learn leadership and teamwork, and of course, have fun.

American Legion National Commander Clarence E. Hill is among the dignitaries scheduled to take in the Jamboree and spend time with Scouts and their leaders.

“The American Legion’s support for Boy Scouts of America began at the Legion’s first national convention in 1919,” Hill says. “Today, Legion posts sponsor more than 2,500 Scouting units across the country. It’s a perfect fit. Legionnaires bring their service-learned skills and experiences as veterans to help build character and positive traits in our country’s youth. Few other post activities generate more good will from the community.”

This may be the last jamboree at Fort A.P. Hill. The Scouts have been developing a permanent camp near the New River Gorge in West Virginia that will “allow for white-water rafting and other outdoor activities,” according to one BSA official. “It will also give the organization more space and, ultimately, more control, because they will own the land on which the jamboree is taking place, instead of the U.S. military.”
Posted by VolneyVet at 8:19 PM