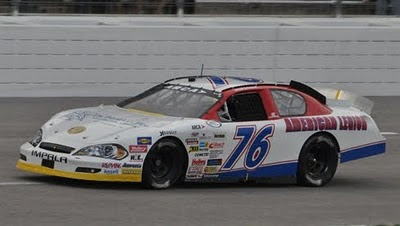 The American Legion/David Law Firm 76 Freedom Car,
seen in a race earlier this season, finished
ninth Sunday in Toledo. James V. Carroll
Jerick Johnson and The American Legion/David Law Firm 76 Freedom Car arrived at Toledo Speedway in Ohio last week with little knowledge of the half-mile paved short track.
Johnson and the Team Johnson Motorsports crew left town Sunday with their first top-10 finish in the 2010 ARCA Racing Series. Prior to the May 23 race, Johnson told Toledo Blade newspaper reporters he didn't get his first look at the Toledo track until Saturday.

"I just hope I get out there and put in some practice laps and get a good feel of the place," Johnson said. "We'll talk to some of the veteran drivers who have been here before and gather as much information as we can."

Mission accomplished.
Johnson's ninth-place finish is his best in the four races he has run in the ARCA Racing Series presented by RE/MAX and Menards. The 76 Freedom Car crossed the finish line 22nd at Salem Speedway in Indiana, 15th at Texas Motor Speedway, and 16th at Talladega Speedway in Alabama. Due to engine failure, Johnson failed to qualify in ARCA's season opener during Speed Weeks in Daytona, Fla.

The top-10 finish in the Menards 200 at Toledo elevated Johnson to 18th place in championship points - up one spot from 19th. Johnson has raced in four of six ARCA Racing Series events this year.

Johnson's race results outperformed his practice and qualification efforts. His 17th-place practice lap average was 106.528 mph. And his 105.436 mph qualification run was good enough for 23rd place in the 32-car starting grid - 7.43 mph slower than Chris Buescher, who captured the pole at 112.867 mph. Buescher won the 100-mile race.

While at Toledo, Johnson said his mission was two-fold - running in the race and spreading the word about The American Legion and Legion Racing.

The next stop for Johnson and the 76 Freedom Car is Pocono Raceway at Long Pond, Pa., where he will compete in the Messina Wildlife Stopper 200. Qualification runs are scheduled to begin June 4 at 1:45 p.m., and the 80-lap race on the 2.5-mile tri-oval is schedule to start Saturday, June 5 at 1 p.m. The race will be televised live on SPEED.
Johnson also generated positive press for The American Legion as the subject of an article in the Toledo Blade.