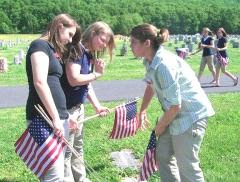 JOHN E. USALIS/Staff Photo From left, North Schuylkill Elementary School sixth-graders Samantha Brown, Alexus Washington and Kimber Eye place a flag at the Christ Church Cemetery gravesite of Michael Puglia, a U.S. Marine Corps veteran of World War II, during Wednesday's flag distribution.
FOUNTAIN SPRINGS - The meaning of Memorial Day, the American flag, the Pledge of Allegiance and other patriotic traditions were the focus of a special program Wednesday for the students in the North Schuylkill School District.

For some students in the district's elementary school, the lessons learned lead to a hands-on experience as they placed American flags at the graves of U.S. veterans in local cemeteries.
Members of veterans posts in Ashland and Girardville visited the elementary school in the morning and the high school in the afternoon to speak to the students in what has become an annual program.

During the elementary school program, the students sat on the gymnasium floor and heard explanations about the traditions, rituals and items connected to Memorial Day and other patriotic holidays. The students were welcomed by Elementary Principal Neall Jones, who explained the purpose of the program.

"Today, we have a special program in honoring the veterans who fought for our country, especially those who died or were injured, to keep everybody safe and keep everybody free," Jones said.
Jones then handed the microphone to Thomas C. Dando, who served in the U.S. Army during the Vietnam War.

"This day is very important to all these men you see behind me," Dando said. "They came from whatever else they had to do because they wanted to talk to you and make you are aware of the importance of Memorial Day, which is the day set aside to honor all those who have made the supreme sacrifice for their country."

There was also a display of emblems used to hold American flags at the graves of veterans. World War II veteran Daniel Trautman, who participated in the Normandy invasion, explained the different emblems.

Dando thanked the elementary students who would place the flags on the graves after the program, stating that they would be a great help in making sure that each veteran's grave would have a U.S. flag flying at it. He said what would take many hours for the veterans to place flags would take a very short time for the many students to do.

As the program ended, the students were each given a poppy before boarding buses to be driven to the cemeteries in the Ashland area. The students were given flags and instructed on how and where to place them.

Posted by VolneyVet at 9:33 PM