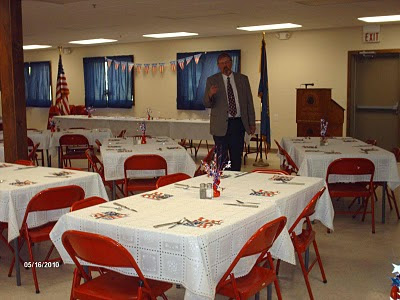 John Hudzina (past commander Post 858) checking out the arrangements

The annual Oswego County Girls and Boys State dinner and orientation was held on Sunday, May 16th at Raymond-Faulkner-Cook Post 858 in Cleveland, NY. Watch for pictures of candidates in the near future. A full menu consisted of roast pork and roast beef with mashed potatoes, gravy and salad. Punch and lemonade was available as well as coffee. Over 100 persons attended and pictures were taken of all candidates for the program.

A short program followed the dinner and this year's candidates heard from last year's attendees as to what to expect at Boys State and Girls State. It is a week-long practical course in government where the teens get to practice politics and run for governor, mayor or judge as well as participate in sports, music and producing a newsletter.

In job and college applications, the attendance at Boys or Girls State carries a lot of weight and can influence whether you are accepted for the position or school. Many presidents of the United States have been Boys Staters in the past.
Posted by VolneyVet at 3:18 PM