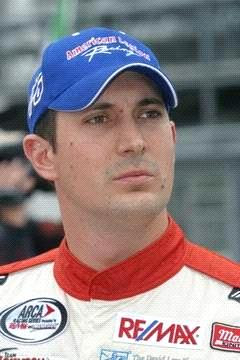 JERICK JOHNSON
By MATT MARKEY
BLADE SPORTS WRITER
Jerick Johnson intends to wheel the No. 76 Freedom Car into the starting grid for today's ARCA race at Toledo Speedway, and part of the push behind him will be the support of the world's largest veteran's organization and the weight of knowing he represents all those that have served this nation.
"Driving the American Legion car is a tremendous honor, and it is also a huge responsibility," Johnson said Friday night, shortly after arriving in Toledo. "You're really visible out there, hoping to bring more recognition to all of the troops and the veterans and also to let people know how important the American Legion is in this country."
Johnson and the No. 76 team made the move into the ARCA Racing Series presented by
RE/MAX and Menards this season after running in the ASA Late
Model Challenge Series last year, when Johnson won "Rookie of the Year" honors. He also has two ARCA races from the 2002 season on his resume and ran in five NASCAR Busch Series races in 2007.
Johnson didn't get his first look at the Toledo Speedway half-mile oval on Benore Road until yesterday.
"I just hope to get out there and put in some practice laps and get a feel for the place," he said. "We'll talk to some of the veterans who have been there before and gather as much information as we can."
Johnson is 19th in points in the ARCA Series but has competed in just three of the five events to date. He was 22nd at Salem, 15th in Texas, and finished 16th at Talladega. His duty in Toledo will be customarily two-fold - running in the race and working to spread the word about the American Legion.

"A lot of our military services sponsor cars, but it's not just about racing - it's about utilizing a powerful marketing tool," Johnson said. "We're trying to get the message out that the American Legion is not just a building or a place. It's an organization that is involved in a lot of good causes. We want to encourage the next generation of members to come join the American Legion."