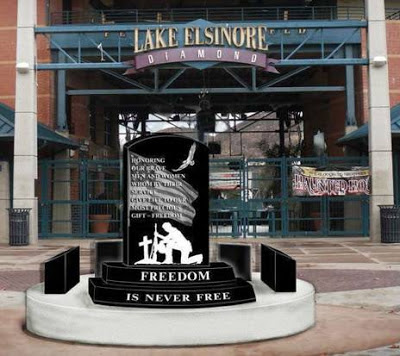 Some Lake Elsinore residents complained
about the planned design and
location of a veterans memorial.


A proposed veterans memorial that has caused controversy since its design was unveiled will be built at Diamond Stadium with a depiction of a Christian cross, the Lake Elsinore City Council decided unanimously, 5-0, on Tuesday, Nov. 13.

More than 100 people packed the Lake Elsinore Cultural Center for the meeting, far more than a typical City Council gathering. The majority of speakers were in favor of keeping the cross, and pro-cross comments were punctuated with applause, cheers and shouts of "hoorah" from the crowd.

The memorial will be built by Perris-based Sun City Granite for a little less than $50,000.

Ralph Zunker, of American Legion Post 200, and other speakers who favored keeping the cross said it didn't represent just Christianity. Zunker said the depiction of a solider kneeing before the cross represented a veteran honoring a fallen colleague.

"These people need to go and find another place to live other than America," Zunker said of the cross's critics.

Barbara Anderson was one of the few to speak against the memorial. She said the cross didn't represent all veterans.
"What about the others who served, what about the Muslims?" Anderson said.

"Isn't their sacrifice just as important as that of any Christian or any Jew?"

The polished black granite memorial has been a source of controversy since the proposed design was unveiled last month. A group of Lake Elsinore residents took to the City Council to complain about the inclusion of the cross and the plan to place it on the memorial outside Diamond Stadium, where the Lake Elsinore Storm play.

Last week, the Washington, D.C.-based group Military Association of Atheists & Freethinkers wrote to the council, saying it represented local veterans who object to the cross.

A committee of local veterans was asked to re-examine its proposed design, but declined to remove the cross or move the memorial.

The committee did agree to add a Jewish Star of David at the suggestion of Councilwoman Melissa Melendez. The councilwoman said it would make the memorial – which depicts a World War II-era soldier – more historically accurate, because gravestones from that era used both symbols.

Mayor Brian Tisdale, a military veteran, said he wasn't particularly religious, but he saw the cross as an accurate historic representation and not a religious symbol.

Council members also rejected concerns that the location wasn't sufficiently serene or that it would be used as a jungle-gym by rambunctious kids.

Melendez, a Navy veteran who last week won election to the California Assembly, also defended the memorial against criticism it was artistically lacking.

"This isn't an opportunity to show how creative and artistic we can be, it's to honor our veterans," Melendez said. "And if it isn't fancy enough, there are lots of museums that you could perhaps find something more creative in."

This is happening across the country and even though we have no problems locally, we must be alert to the dangers of these radical groups.

Posted by VolneyVet at 6:15 PM