Veterans of the 1944 Normandy landings gathered Thursday at the site of history's largest amphibious invasion for a day of ceremonies marking D-Day's 69th anniversary. 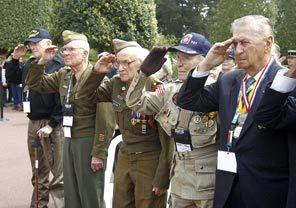 COLLEVILLE-SUR-MER, France — Veterans of the 1944 Normandy landings gathered Thursday at the site of history's largest amphibious invasion for a day of ceremonies marking D-Day's 69th anniversary.

Around two dozen US vets, some in their old uniforms pinned with medals, stood and saluted during a wreath-laying ceremony at the memorial overlooking Omaha Beach, where a U.S. cemetery holds the remains of over 9,000 Americans who died during the vicious battle to storm the French beach under withering Nazi fire.

Commemorations of the June, 6, 1944, battle began in respectful silence early Thursday morning, with the stars-and-stripes raised in a quiet ceremony at the cemetery.

Tourists, many from the U.S. and Britain, gathered under a brilliant spring sky to witness the flag-raising amid the neat rows of thousands of white marble crosses and stars of David marking the graves of U.S. servicemen and women fallen in the Allied invasion of Normandy.

A full day of ceremonies - including fireworks, concerts and marches - was taking place across Normandy in honor of the more than 150,000 troops, mainly U.S., British and Canadian, who risked or gave their lives in the invasion.

"The tide has turned. The free men of the world are marching together to victory!" Eisenhower said in an historic address after the invasion was launched.