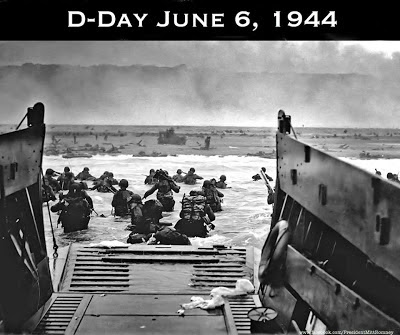 Today June 6 is just another day for most of us as most fail to realize the import of this day in recent history, a day in which TWO landmark events in human history occurred:

In 1942, a still reeling US Navy made a huge bet they knew where the Japanese Imperial Navy was about to attack us and gambled by leaving the Hawaiian islands wide open for attack. Following a strategic draw in the Battle of the Coral Sea the previous month on May 5, 1942, Admiral Nimitz organized the balance of the fleet including a crippled USS Yorktown which had been damaged in the Coral Sea and represented 1/3 of the remaining United States carrier force. Against all odds, Yorktown was repaired and returned to service in a matter of hours and not weeks. Despite the readiness of Yorktown, America still faced daunting odds. Nevertheless, the balance of the Pacific Fleet was committed to a battle, the likes of which the world had never seen - over a little-known atoll in the north Pacific called Midway Island. This battle was significant for several reasons: It spelled the end of the battleship era in which leviathan ships hurled shells at each other at close distances (an aerial engagement of naval vessels in which fully 90% of the combatants did not see their enemy.); It fundamentally changed the battle doctrine of the USN to see naval air as the primary weapon and lastly it was the first significant defeat of an up-to-that-point undefeated IJN. Against overwhelming odds and through savage fighting, US aviators not only blunted the Japanese attack but sank four enemy carriers in exchange for the Yorktown. Almost to the day, 6 months after Pearl Harbor, the seemingly unstoppable Imperial Japanese campaign in the Pacific had reached its zenith and it’s navy was sent home in disgrace after the brave sacrifice of many Naval aviators in their hopelessly antiquated aircraft.

Two short years later in 1944, this same day is also chronicled in military history as the day the largest invasion in human history signaled the beginning of the liberation of Nazi occupied Europe in which over one hundred thousand allied soldiers, sailors and airmen from various countries, held together with the iron will and statesmanship of General Eisenhower, committed to an enormous aerial and seaborne assault against the vaunted Atlantic Wall; A wall constructed by the Germans for years in anticipation of this day. The outcome was far from certain, and in fact, was very nearly a dismal failure as Eisenhower listened to reports, and was startlingly close to deciding to order a withdrawal from the beaches. Yet somehow, some way, good found a way and triumphed that day and many subsequent days, leading ultimately to the end of a fascist regime responsible for unspeakable crimes against humanity.


These two humble paragraphs do not justice to the honor, and courage displayed on these two days in countless acts of valor and intrepidity by the brave men who fought in these two battles which could not have been more different in their scope and yet had such a similarly profound impact on the prosecution of World War II.

Posted by VolneyVet at 1:00 PM