A PLEDGE TO SERVICE 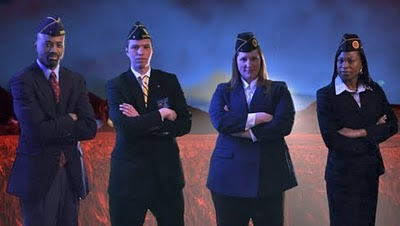 Capturing the attention of a younger generation raised on all things video has been the preoccupation of public relations and marketing firms ever since the NBC peacock started broadcasting television programs in "living color."

Today the Internet, iPods, DVD players and a plethora of electronic gadgets are all providing videos on practically every subject imaginable.

National Commander Clarence Hill has been advocating that all Legionnaires should engage these "emerging" media as effective tools to reach out to younger veterans and their families. The American Legion is on Facebook, Twitter, LinkedIn and YouTube.

Now, a brand new video is available that targets the younger generation and offers a powerful new tool to tell The American Legion story in just under four minutes.


"A Pledge to Service" presents the Four Pillars of our organization in a fast-paced, highly charged production narrated by Ryan Gonzales, creative director for the Department of Florida and graduate of the 2009 American Legion National College. Four Legionnaires, veterans of Iraq and Afghanistan, assist. With an original music score, the video ends with a call to join us either through the Web site or at "your nearest American Legion post."

Produced by Public Relations Commission staff, the video is now posted on The American Legion Web site and will be available free in mid-March on a DVD by request to pr@legion.org or by calling (317) 630-1253.

Since the video is an American Legion production and we own the copyright, all Legion posts are free to reproduce and distribute the video as appropriate. Some uses include posting on a post Web site for viewing on-demand; using it at membership booths running in a looped configuration; displaying it on a laptop or DVD player for individual membership recruiting presentations; marketing to cable and broadcast television stations; presenting it during public speaking opportunities to community and civic groups; and having local movie theaters run it as a public service piece before feature presentations.

"A Pledge to Service" will officially debut at the Washington Conference on March 2. Because the contents are not dated, the video has a long shelf life to offer unlimited marketing opportunities. Additionally, a series of four public service television spots are in production based on the "Pledge to Service" theme.

As with all public relations tools, your feedback is important. Share information on how your post is using the video so others might consider doing the same. Creativity is the rule.

The public relations commission urges all PR chairmen/officers to send your e-mail addresses to the office. In addition to receiving the latest press releases and advisories, a new PR "reflector" is being developed as an electronic forum for Legionnaires engaged in public relations to share ideas, ask advice and get the hottest PR tools off the press. Send your e-mail address to pr@legion.org.

Robert L. Morrill of the Dept. of New York is chairman of the National Public Relations Commission.

2. Copy the code from the "Embed" box found in the shaded window located in the upper right-hand column.

3. Paste the code into your Web site or blog to embed it.

Posted by VolneyVet at 8:07 PM