The new American Legion promotional video has been completed and will debut at the Washington  Conference.  Titled, “A Pledge to Service,” the 3:55 minute, fast-paced video features an original  music sound track, hosting by a recent National American Legion College graduate, and four Iraq- Afghanistan veterans highlighting the Four Pillars of The American Legion.  DVDs will be  available to those attending the conference and by request from the public relations office after the  conference at no cost to posts/districts and departments.  Television/cable public service spots will  be produced based on the theme of the video in the forthcoming weeks. 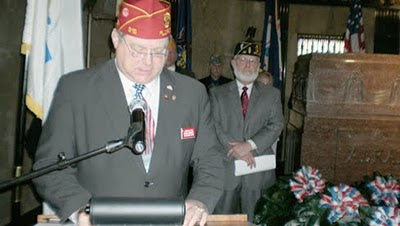 “Two score and 14 years before our organization was founded, President Lincoln summed up the reason why The American Legion would one day be needed,” Hill said in a radio address he delivered at Lincoln’s final resting place. “’To care for him who shall have borne the battle and for his widow and his orphan.’ These 17 words, taken from President Lincoln’s second inaugural address, have been adopted as a motto for the Department of Veterans Affairs. While nobody denies that the VA has its problems, it does provide excellent care. Moreover, The American Legion is proud of its advocacy of today’s veterans, and its work to ensure that the VA lives up to Lincoln’s solemn promise.”

Visits to the tomb by national commanders have become a tradition in the past, and this year marks the 76th annual American Legion Lincoln Day Pilgrimage. After Hill’s visit to the tomb, he continued the theme to hundreds of American Legion family members during a luncheon hosted by Springfield American Legion Post 32.

“With the times, we have expanded (Lincoln’s) commitment to also include caring for her who shall have borne the battle and for her widower and her orphan,” Hill said. “The demographic of the American veteran is changing. We now have a much more diverse veterans’ population than in past generations. This diversity includes a growing and significant number of women veterans who sacrifice no less than their male counterparts. In this war without a front, there are no safe areas. As such, women who historically were not severely wounded in great numbers during previous conflicts are now returning home with limbs missing, terrible burns or blindness.
“We advocate for a strong Department of Veterans Affairs that not only treats common war ailments such as post traumatic stress disorder, traumatic brain injury and severe burns, but also addresses breast and cervical cancer, sexual trauma and maternity care,” Hill continued. “The American Legion family will be there for all of our veterans because that is what we do.”

Hill pointed to President Obama’s signing of a law last October, which enacted advance funding for VA appropriations, as an example of Legion advocacy that made a difference. “Now, the VA knows a year in advance what resources will be available so it can plan accordingly. Advance appropriations will go a long way toward minimizing compromises in the delivery of the high quality health care our veterans expect and deserve.”

Despite significant legislative successes, Hill stressed that The American Legion’s advocacy is still needed. He called the huge backlog of veterans waiting for VA compensation, “one aspect of President Lincoln’s promise that remains unfulfilled.”
Posted by VolneyVet at 10:18 PM