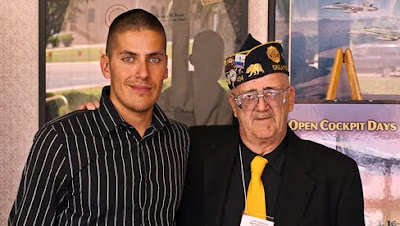 Richard "Sunny" Farrand, California's Heroes to Hometowns
chairman, helped Julio "Alex" Guzman receive
a Sears charitable donation and
an appearance on The Bonnie Hunt Show.
The American Legion's Heroes to Hometowns program was created to support severely injured servicemembers in their transition back to society. Often, arranging support can be as simple as picking up the phone and making a few phone calls.

This was exactly the case two days before Veterans Day on Nov. 9, when Phil Riley, director of the Legion's National Security division, received a phone call from another Legion employee who told him that The Bonnie Hunt Show was looking to provide support to a wounded warrior. The syndicated talk show, through sponsorship from Sears Holdings Corporation, was arranging a "Heroes at Home" special to air on Veterans Day, during which an impaired servicemember would receive a $15,000 gift card from Sears.

Riley didn't know anyone who could appear on the show on such short notice, but he did know an individual who could find someone. Riley phoned Richard "Sunny" Farrand, the Legion's Heroes to Hometowns chairman in California.

Guzman, who was injured in the plot to capture Fallujah, was in a pinch. He had recently lost his job, his wife was pregnant, and he was attending college full time working toward a degree in human services. His combat-related injuries only complicated matters further, as he has traumatic brain injury and nerve damage in his right leg. He struggles with PTSD, as well.

That made Guzman the perfect candidate for Sears' charitable contribution.

"It was perfect timing because he just lost his job due to PTSD, and his wife was about to have a baby," Farrand said.

Farrand continues to support Guzman and work with him on dealing with PTSD. Guzman's wife delivered their son last December.

That same month, Guzman ate lunch with National Commander Clarence Hill at Legion Post 255 in National City, Calif. Guzman used the meeting to express his thanks to The American Legion.

"It was a nice surprise for both of them," Farrand said.