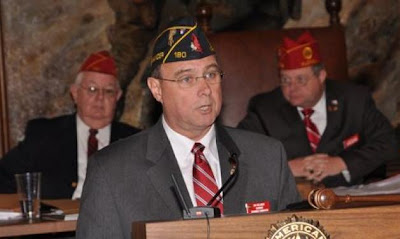 “How did we become a Gold Brigader? We did it all by just asking,” Dellinger said. “’Just Ask’ was the theme we (National Membership & Post Activities Committee) had back in 2001-2002, and in both years we had positive (membership) growth. It was a team effort because everybody bought into ‘Just Ask.’ And we can do it again.

“I promise you we will work hard together as a team this year to ensure that our membership goes up, and we have the best year ever for The American Legion.”

Dellinger’s professional background is in construction, and if he’s elected to the Legion’s top position during the upcoming national convention in Houston, his slogan will be “Building for Tomorrow-Today.”

“I build things, and that’s what I want to do this year,” he said. “Every department has a five-year membership plan, and now it’s time to start building upon those plans.”

After discussing his slogan, Dellinger asked all district and county commanders to rise. “You are the key to our success this year because you are the intermediate step between our posts and your departments,” he said. “The information you get from up above has to be disseminated down. It’s your responsibility.”

“This year will be your legacy,” Dellinger said. “What will your legacy be? I know you will do the best that you possibly can because our veterans and our communities depend upon us because we still serve America.

“And I promise you, if elected in Houston, that I will work as hard as I can to assist each and every one of you so you can have the greatest year you’ve ever had.”

Posted by VolneyVet at 9:22 PM