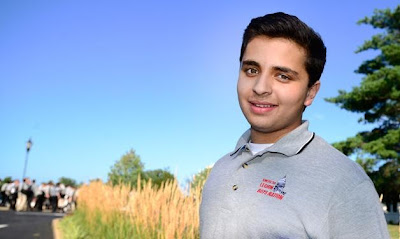 Akbar Khan, a Boys Nation senator from Utah, has started a nonprofit organization, Bags to Riches, that donates unwanted cloth bags to needy individuals in all parts of the world. (Photo by Eldon Lindsay)


When Akbar Khan, a 2013 Boys Nation senator, returned from a visit to college campuses with his arms full of brochures and handbooks, he asked his uncle for a spare bag to borrow to collect the masses of paper that he was given. His uncle pointed him to a garage, where he saw a garbage bag full of “freebie” cloth bags that his uncle had collected from years of attending business conferences.

It was there that Khan’s idea for his nonprofit organization, which now spans five continents, was born. Khan went on to found Bags to Riches, an organization that collects bags given away and discarded at business conferences and distributes them to children in needy parts of the world. Founded in July of 2011, Bags to Riches has sent bags to children in Peru, Bangladesh and cities like Salt Lake City, Washington, D.C., Atlanta, Chicago and Los Angeles.

Nearly 17,500 bags have been distributed worldwide since the organization’s founding, Khan says.

“Essentially, we collect and donate unwanted and extra conference bags,” Khan says. “They range from tote bags, to messenger bags, to backpacks... . They have almost no utility, and they almost always go to waste.”

Bags to Riches started modestly, with Khan doing most of the legwork. The rising high school senior from Salt Lake City traveled throughout the country, attending business conferences with a receptacle for unwanted bags and would prepare them for shipping himself.

He is still the only official employee, but he has extended his reach using the Internet and events like Boys Nation to recruit volunteers from all over to attend conferences in their localities and collect the discarded bags.

“I’m the only employee, but I have volunteers all across the world,” he says.
The donated bags end up in the hands of underprivileged youth and homeless, who Khan says can use the bags to carry their books, food and even important documents like Social Security cards. These are items that would normally end up being transported in plastic bags, which are less environmentally friendly than a cloth bag.

The organization operates on a budget of a few thousand dollars, which Khan says mostly comes from private donors.

Throughout his week at Boys Nation, his fellow Boys Nation senators expressed interest in helping him operate the company as they begin college.

“I have already had a lot of people express interest in helping out with Bags to Riches in the future,” Khan says. “These people will be key to the organization in the years to come.”

But Khan, who hopes to attend Stanford University and become an entrepreneur, has big plans for his nonprofit start-up in the near future.
“My long-term goal is to collect and donate every single unwanted conference bag in the world,” he says.

Posted by VolneyVet at 3:15 PM