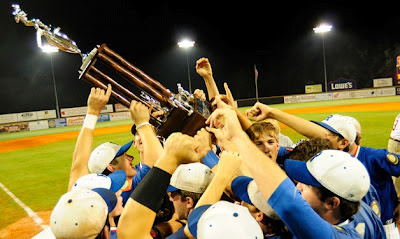 The 86th American Legion World Series wrapped up at 1:30 a.m. Wednesday in Shelby, N.C., at Keeter Stadium. New Orleans Post 125 was crowned the 2012 World Series champions — a title the post hasn’t seen since 1960.

Brooklawn defeated Bellevue, Wash., 4-3 during Game 14 on Tuesday and turned around to play the championship game against New Orleans. The doubleheader was delayed due to rain but once the first pitch was thrown at 11 p.m., New Orleans rolled, keeping Brooklawn scoreless to claim a 4-0 victory.

Emerson Gibbs pitched a complete shutout to capture the win on the mound and be named the 2012 George Rulon Player of the Year. Matthieu Robert added a three-run RBI and Armand Daigle had a single RBI, helping their team defeat Brooklawn (59-5) twice in two days straight. The Mid-South regional champs ended their season 41-7.

“We did enough offensively; we weren’t explosive but Matthieu Robert got the big hit in the seventh with a two-run double and Emerson (Gibbs) just closed it out,” New Orleans manager Joey Latino said. “It was great pitching, great defense, and we are just ecstatic.

“You see the boys and their reaction, and it’s well-deserved,” Latino said. “They put in a lot of hard work all summer; they dedicated themselves to making this (Legion World Series) their goal, and it came true tonight. It’s really a great feeling.”

New Orleans players jumped into a team dog pile after the win with excitement and reassurance. Former Jesuit High School student Luke Voiron, New Orleans’ catcher, wavered about returning to his Legion ball team after completing a year of college. All doubts were removed after the big win.

“When I was asked to come back (from college) and play this summer, I was kind of iffy about it — I’m not iffy about it anymore. It was the best decision of my life,” Voiron said. “They (Jesuit High School) really hold baseball to tradition, so just to come back and win this for the school is amazing.”

And for left fielder Armand Daigle, celebration is on his “back to school” list.

“I’m actually missing the first day of school (a freshman at Louisiana State University) right now, but I will be there Friday to celebrate with all of my friends that are there,” Daigle said. “It’s just an amazing feeling right now. We won our state championship my junior year and this way exceeds that.”

During closing ceremonies, players from a few of the eight World Series teams received notable American Legion Baseball awards. The recipients were:
Additionally, players' statistics were compiled from regionals and the World Series to create the 2012 American Legion All-Tournament Team.
Posted by VolneyVet at 1:54 PM