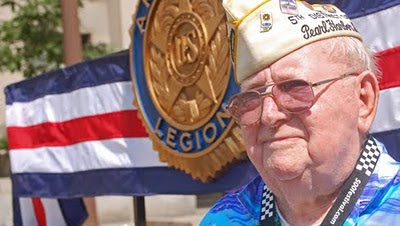 No one was talking about post-traumatic stress disorder at the time of Paul Kennedy’s medical discharge from the Navy near the end of World War II. Nearly four decades would pass before the condition would be defined, acknowledged and commonly diagnosed among combat veterans.

Kennedy, a signalman on a destroyer, had nearly been killed by a Japanese warplane at Pearl Harbor on Dec. 7, 1941. He watched in horror as sailors aboard USS Oklahoma were propelled to their deaths when the first torpedo hit. He sailed in 28 round-trip convoys across the North Atlantic and helped escort landing craft crossing the English Channel into Normandy on D-Day, fully aware of the fate awaiting those who would storm the beaches. Kennedy was shot by an enemy submariner forced to surface right next to his ship. “The first guy to come out, came out with a machine gun and started strafing us,” the Legionnaire from Greenwood, Ind., explained. “I am standing up there, and I caught a little lead … it wasn’t serious, but it hit me. But that’s not what put me in the hospital. What put me in the hospital was PTSD.”

Kennedy, now 89, has spent nearly 70 years coming to terms with his combat experiences and helping other veterans get through theirs. “The way I got over it was talking about it with my fellow veterans,” said Kennedy, who joined Legionnaires from three other war eras on The American Legion’s float in the IPL 500 Festival Parade, part of the celebration surrounding the Indianapolis 500, last weekend.

Kennedy said it’s vital for veterans of different war periods to make connections, especially with those coming home from Iraq and Afghanistan. He spends an hour every Tuesday evening in a “vet-to-vet” session of peer therapy which transcends the war eras. “We’ve got these young guys coming in now with a monkey on their back,” Kennedy explained. “I can tell them how to get rid of it. Others can, also. We’ve got several there from the Vietnam War – which was a terrible war. They know.”

Before climbing aboard the Legion float in the May 29 parade, Kennedy discussed his wartime experiences and the challenges he faced in the years that followed. Joining him on the float were Indiana Army National Guard Master Sgt. John Madden (whose wife and children make them a seven-Blue Star Family) along with sons Cayce and Tim; Vietnam War veteran Larry White of American Legion Post 500, in full Legion Riders regalia; and John Thomas, a Korean War veteran and adjutant of Post 249 in Indianapolis.
While waiting for the parade to start, Kennedy and others escaped the heat inside the Indiana National Guard Armory in downtown Indianapolis. There, the World War II veteran recollected some of the experiences that would shape the rest of his life. One – while serving on the USS Sacramento on Dec. 7, 1941 –  would alter the course of Western civilization.

“After I was relieved at 4 a.m., I stayed up and drank coffee until 5:30 with the fellow who relieved me. I was going to sleep all day Sunday. At about five minutes until 8, the alarm went off, and I thought it was a drill. I wrapped the pillow around my head. I thought, this is one drill I’m not going to. Half our crew was on liberty anyway.

“Then, a buddy of mine pulled me out of my bunk and he said, ‘Come on, Paul! The Japs are bombing the hell out of us. Get your gas mask and your helmet. Get to your battle station!’”

The first thing he saw after passing through the hatch, Kennedy said, was a Japanese torpedo plane directly overhead. “The pilot had his canopy back. He was looking down at me, and I was looking up at him, and I can remember his face clearly. He dropped that torpedo in the water and I watched it. It went across and hit the Oklahoma. There were three men on the side of the Oklahoma that were standing right above where the torpedo hit. They went flying up in the air like rag dolls, and back down into the water. I went on to my battle station.

“There were torpedo planes coming in left and right. We got hit with 350 planes, and every plane had either a 500-pound bomb or a torpedo. Each one of those battleships caught seven or eight torpedoes apiece. While they were doing that, these bombers were dropping bombs on everything. One bomb was meant for our ship but hit on a dock beside us.”

Kennedy soon had a brush with death. “I went up to my signal station, and there was a hoist on the tower – a flag hoist – so I’m busy running that flag up in the air, which is what I am supposed to do, and a Jap zero drops a 500-pound bomb on the Pennsylvania, which is in dry dock, which is where we were a week before, and immediately heads our way and starts strafing. I thought, ‘Do I want to get shot in the back or the belly?’ I elected to face him. I won’t tell you what I said. He missed me by an elbow length. He didn’t hit anyone on our ship. But from that time on, it was just chaotic.

“The Oklahoma was over on her side in 20 minutes. Those guys were scrambling for their lives. Guys were abandoning ship. So it was complete chaos. The first wave left, and we thought, ‘Well, it’s all over.’ And here the next wave came in. They continued to bomb and do damage, but the thing that really bothers me is these sailors were in the water – dead, in their white uniforms, in the oil, in the water – and the boats were picking them up. They would get a boatload of dead men, and some live guys, and these Jap planes would come down and strafe them. Absolutely defenseless. That hurt. That still bothers me today. It took me a long time to forgive the Japanese. I didn’t want to go to my grave hating anybody, so I forgive them.”

His experiences in the North Atlantic were similarly harrowing, including the machine-gun wound and the D-Day assault, before the weight of the war became too much to bear.
“I got to the point where I’d had it,” Kennedy explained. “I got to a point where I didn’t care about anything, anybody. I didn’t care who won the war. I was that bad. I got into the hospital, and I wouldn’t eat. They said, ‘We will force-feed you.’

“I said, ‘Go ahead – I don’t care.’ I didn’t want to go on liberty. I just wanted to get out. So they gave me a discharge and enough money to get home, and they said, ‘Don’t talk about it.’ That was the wrong thing. It took me a long time before I got over it.”

The only treatment that worked for him, he said, was talking about the experience with other veterans. A member of multiple veterans-service organizations, the Pearl Harbor survivor now embraces his wartime memories, one in particular:

“That night at Pearl – about midnight – the West Virginia was anchored right in front of the Arizona. The Arizona was burning and burning. Smoke was pouring off of it. The West Virginia’s flag was still up on her stern. From our perspective, it looked like the flag was right in the middle of the fire, the flame and the smoke. Today, when I hear “The Star-Spangled Banner,” I get a cold chill up my back because I can still see that site. It inspired all of us to see that flag still flying.”