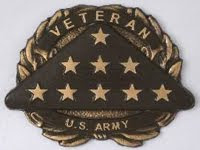 The Department of Veterans Affairs is offering bronze medallions to attach to existing, privately purchased headstones or markers, signifying a deceased's status as a Veteran. The new item can be furnished instead of a traditional government headstone or marker for veterans whose death occurred on or after Nov. 1, 1990, and whose grave in a private cemetery is marked with a privately purchased headstone or marker.

The medallion is available in three sizes: 5 inches, 3 inches and 1 ½ inches in width. Each bronze medallion features the image of a folded burial flag adorned with laurels and is inscribed with the word "Veteran" at the top and the branch of service at the bottom.
Next of kin will receive the medallion, along with a kit that will allow the family or the staff of a private cemetery to affix the medallion to a headstone, grave marker, mausoleum or columbarium niche cover.

More information about VA-furnished headstones, markers and medallions can be found here.

VA is currently developing an application form for ordering the medallion. Until it is available, applicants may use the form for ordering government headstones and markers, VA Form 40-1330. Instructions on how to apply for a medallion are found here.

Veterans with a discharge issued under conditions other than dishonorable, their spouses and eligible dependent children can be buried in a VA national cemetery. Other burial benefits available for all eligible veterans, regardless of whether they are buried in a national cemetery or a private cemetery, include a burial flag, a Presidential Memorial Certificate, and a government headstone or grave marker.

VA operates 131 national cemeteries in 39 states and Puerto Rico, and 33 soldiers' lots and monument sites. More than 3 million Americans, including veterans of every war and conflict - from the Revolutionary War to the current conflicts in Iraq and Afghanistan - are buried in VA's national cemeteries on more than 19,000 acres.

Information on VA burial benefits can be obtained from national cemetery offices, from the VA Web site or by calling VA regional offices toll-free at (800) 827-1000.
Posted by VolneyVet at 7:40 PM