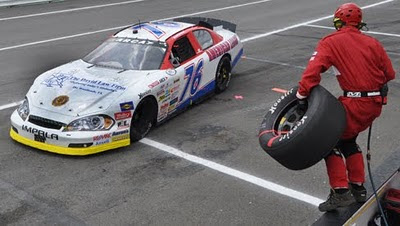 Jerick Johnson comes into the pits during the
Messina Wildlife Management 200 at Pocono
Raceway on Saturday. James V. Carroll

Driver Jerick Johnson retired The American Legion/David Law Firm 76 Freedom Car on the 35th lap of the Messina Wildlife Management 200 at Pocono Raceway on Saturday after a rear gear failure. His withdrawal from the ARCA Racing Series 80-lap event resulted in a 30th-place finish.

The Pocono weekend at the famed 2.5-mile triangle track at Long Pond, Pa., was more an exercise of experience for Johnson than it was of result. Driver and crew spent most of their 100-minute practice time Friday morning not on the track, but, rather in the garage struggling to locate a metallic rub and vibration. The problem eventually was traced to the drive shaft. Johnson ended up getting in only 18 practice laps, and his times were 28th fastest among 34 cars taking practice laps.

Johnson stepped up his pace during the one-lap qualification attempt - qualifying 25th fastest for a 13th-row spot in the 36-car starting field.

"We were never really in the chase for the lead," a disappointed Johnson said after he pulled his wounded car to the infield garage. "The car was not handling very well all weekend, but I believe we could have had a descent finish if the car hadn't broke."

The 76 Freedom Car Team Johnson Motorsports crew has little time to prepare for their next ARCA Racing Series event - the June 11 Racing for Wildlife 200 at Michigan International Speedway near Brooklyn, Mich.