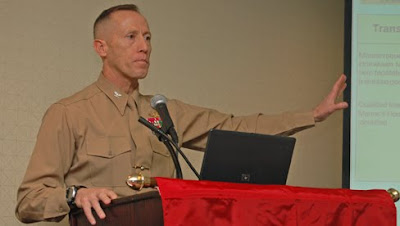 David DuBois remembers trying to explain his work to a young soldier - a member of the so-called "millennial generation." He told him to check out the Office of Wounded Warrior Care & Transition Policy's Web site. The soldier looked at DuBois and politely explained that Web sites are for old people with enough time to sit down and use a computer.

"The millennial generation is an on-demand society," said DuBois, a former American Legion department commander who now directs wounded-warrior and transition-assistance operations for the Department of Defense. "Seventy percent of millennials sleep with their phones," he explained. "They do not use phones to make phone calls so much anymore."

DuBois and three other military-to-civilian experts told The American Legion Economic Commission on Monday that networking - through electronic social media via cell phones, as the new generation prefers, or in person, as with the Marine for Life program - is critical to help newly discharged veterans restart their lives, especially if they come home with service-connected  disabilities.

"We've got to find a way so that every returning servicemember gets red-carpet networking," said DuBois, a 2001 graduate of American Legion College. "To welcome all of them back, networking is the absolutely critical need."

The panel discussion, coordinated by the Legion's Heroes to Hometowns program during the 50th Washington Conference this week, examined transition assistance from multiple angles, all of which rely on making connections among communities' returning servicemembers.