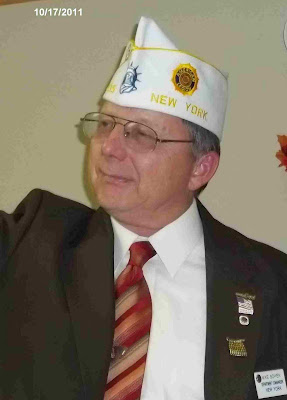 NY Department American Legion
Commander W. Michael Bowen
Commander Bowen is a lifelong resident of Waterloo, NY. He enlisted in the US Navy in 1967 at the age of 17. He served from 1967 until 1971 in Europe and the Mediterranean area. He is a 42-year life member of Warner-Van Riper Post 435, Waterloo, NY.
He is self-employed and the owner of a local general contracting business. Mike and his wife Patty have four children: Jonathan, Brandi, Lori, and Jenny Sue, one grandchild Brandan Michael and three step grandchildren: Alex, Ian, and Brett.
Commander Bowen has served as Commander of Warner-Van Riper Post 435, Commander of Seneca County, Commander of the 7th District, Department Vice Commander and Membership Chairman. At the national level, he served as Consultant to the National Membership and Post Activities Committee. 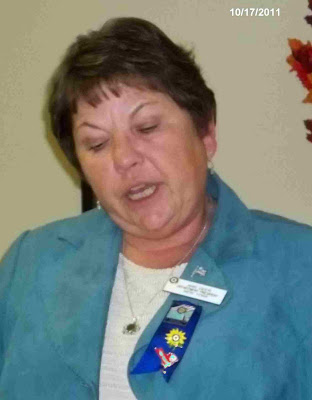 Department of NY American Legion
Auxiliary President Ann Geer
Ann joined Joyce-Bell Unit 578 in Otsego County in 1981 through the eligibility of her husband Stephen, a Viet Nam era veteran. She went on to serve as the Unit President for 6 years.
Ann was elected Otsego County President and served in that capacity from 1988 to 1990, and again in 1994 through 1996.
At the District level, Ann served as District Membership Chairman, District Chaplain and Color Guard captain. In 2003 she was elected Sixth District President.
In 2005 Ann chaired the Department Education Committee, receiving the National Award for Outstanding Department Education Program and in 2007 she was asked to chair the National Security Committee receiving the National Award that year for the Outstanding Department National Security Program.
Ann has lived in Unadilla for 30 years and is active in the community. She is a founding member of the Recreation Commission, which established a community athletic field. She has two grown children: Peter, a computer program designer residing in Brockport, and David, an artist living in Unadilla. 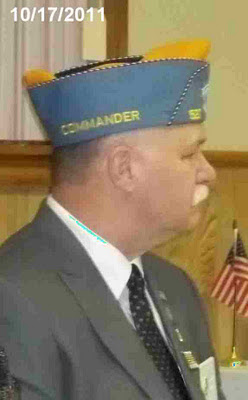 Detachment of NY Sons of
the American Legion Commander
Dr. Greg K. Gibbs
Dr. Greg K. Gibbs is a twelve year member of the Hamburg Squadron #527 in Erie County, NY. Doc gets his eligibility through his deceased father Richard C. Gibbs who served honorably in the US Marine Corps during the World War II Pacific Campaign, serving in combat on Iwo Jima, Tinian and Saipan.
Greg has served at the squadron level including a four-year stint as Commander and served as Erie County Commander for one term and as 8th District Commander for two years. He helped begin the District 7 & 8 Sons ROTC Scholarship Award named in memoriam for Past Eighth District Commander William P. O'Connell. The scholarchip is now in its sixth year.
At the Detachment level, Gibbs has served as the Chairman of the Legislative Commission helping to organize On-the-Hill Days in Albany and Washington and as a Member of the Training and Development Committee, while also serving as the Sons VAVS Representative for the VA Hospital in Buffalo. Doc received a national award for Outstanding Service from National Commander Paul Morin.
A 2011 graduate of American Legion College, he was one of the first Sons to attend. Doc is supported by his wife Pam and his two children, Kristen and Kirt. Kristen in active in the local Auxiliary and Kirt is also a Sons member. In his daily life, he is employed as a professor at St. Bonaventure University in Western New York and holds a Ph.D. degree. 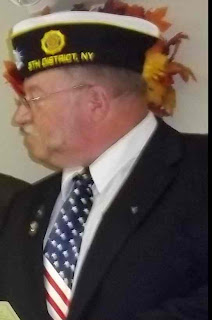 Master of Ceremonies was past County Commander James R. Ellis, currently serving as 5th District American Legion Sergeant-at-Arms. He led those present in a salute to the colors and the Pledge of Allegiance, a prayer was given and the POW/MIA remembrance prayer was read. After the introduction of the head table, dinner was served.
Chairman of the day's activities was John Young, Oswego County Vice Commander.
Programs were produced by past County Commander David Potter II.
Posted by VolneyVet at 7:54 PM