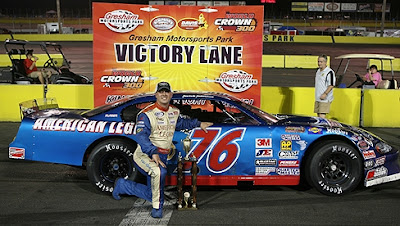 The latest victories give the Team Johnson Motorsports driver 12 top-10 finishes, 10 top-five races and four victories in 16 starts. Johnson's other victories this year were in a May race at Newport Speedway in Tennessee and at Columbus Ohio Speedway earlier this month.

Johnson's win in the trophy dash earned him the pole position in the Midweek Mayhem feature at the half-mile track. Johnson held off a charging Michael lance to pick up his first victory on the GMP high-banks.

"I knew Lance was coming," Johnson said in victory lane. " I haven't raced here much, so I wanted to give him enough room and race clean, but he was going to have to go around the outside to pass.

"This is a sweet victory. I'd like to thank our sponsors, The American Legion and The David Law Firm and all the other folks that have helped us. I especially want to say how grateful I am to all our veterans and active-duty and reserve military forces that protect our freedoms and let us enjoy what we do here at home."

Johnson's Wednesday victory qualifies him for the November World Crown 300 All-Star race at GMP in November. The next race for the 76 Freedom Car is Aug. 13 at Concord Speedway near Charlotte, N.C.
Posted by VolneyVet at 9:07 PM