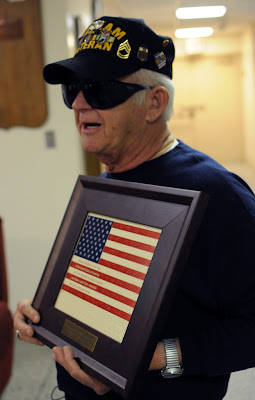 Walter Peters, a 66-year-old Army veteran who served in Vietnam, shows off the Braille American Flag he was presented at the American Legion Post 184 in Thunderbolt Thursday evening. Walters began going blind about seven years ago. (Corey Dickstein/Savannah Morning News)
By Corey Dickstein 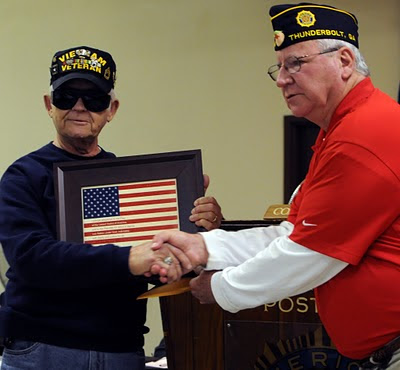 Although Walt Peters has handed out hundreds of miniature American Flags to people at military events as a Red Cross volunteer, it had been seven years since he'd gotten a good look at Old Glory.
At that time he began losing his vision as a side effect of diabetes.


But on Thursday evening Peters, a 66-year-old Army veteran who served multiple tours of duty in Vietnam, was able to see his beloved American Flag once again when he was presented a Braille American Flag at an American Legion Post 184 meeting in Thunderbolt.
"I'm overwhelmed and honored," Peters said. "I'll cherish this for the rest of my life."
The flag features the Pledge of Allegiance written in Braille across its 13 red and white stripes.
Originally designed in 2005 by the son of a now deceased blind veteran of World War II, the Braille Flag in recent years has been installed at Arlington National Cemetery and presented to President Barack Obama.
Johnny McKenzie, a former commander of American Legion Post 184, headed the effort to have a flag presented to Peters.
"He's a good man whose done a lot for veterans and soldiers," McKenzie said. "We wanted to do something for him."
He worked with a Wichita, Kan., company, Kansas Braille Transcription Institute Inc., to have one of the Braille Flags they produce made for Peters.
The company's president, Randolph Cabral, wrote a letter that was read during the presentation.
He wrote: "It is only fitting that our great country should be the first in the world to make it possible for people who are blind to 'see' and experience (the American Flag) as do the sighted."
Behind his large, black sunglasses Peters smiled as he slowly ran his fingers along the Braille Flag.
"It blows your heart up to know that someone cares enough for me to do this," Peters said. "For me, the American Flag is everything. This is just wonderful, and I can't explain how much I appreciate it." 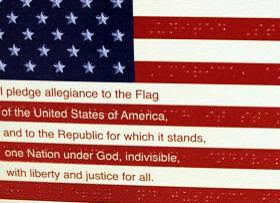