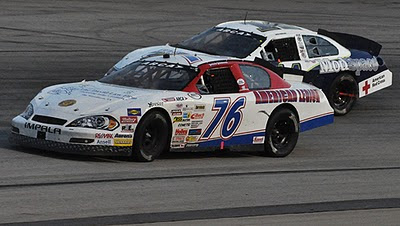 Jerick Johnson and The American Legion/David Law Firm
76 Freedom Car travels to Rockingham Speedway
for series finale. Photo by James V. Carroll
Jerick Johnson, driver of The American Legion/David Law Firm 76 Freedom Car, is in North Carolina this week preparing for the American 200 at Rockingham Speedway. The 200-lap, 200 mile race is scheduled to begin at 1:30 p.m. (EST) on Saturday and will be televised live on SPEED.

"I feel pretty good about our chances to catch the 60 Car for the Hard Charger Award," Johnson said. "I'm glad about the position we are in because we haven't raced all the races this year. I think had we raced all 20 races in the series like the rest of these guys, we'd probably be in the lead."

The driver who advances the most positions during each race will be awarded the CGS Imaging Hard Charger Award for that event, and will receive a $200 product certificate per race. And the driver with the most points at the end of the season will receive the CGS Imaging Hard Charger of the Year award, along with a full racecar wrap valued at $2,500.

Johnson, who is 18th in championship points in the ARCA Racing Series presented by RE/MAX and Menards, has competed in 13 of 19 possible starts this year.

"Patrick Sheltra is racing for the ARCA Series points championship," Johnson said. "That puts us in a good position for the Hard Charger Award. We only have to pass four more cars than he does at Rockingham, and we will get the Hard Charger award - just four cars more."

To watch a video of Jerick Johnson at pitside, click here.
Posted by VolneyVet at 4:25 PM