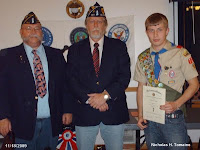 LEGION NEWS
The next county American Legion meeting will be held at Wm. S. Monaghan Post 268 in Oswego on Wed. Dec. 16th at 8:00 PM.

Most of the awards were picked up by parents or scout officials since the boys were at college and not available. Nicholas Tomaino was present in his uniform (pictured above with James Ellis and Cmdr. Palmer) and Mark Vliet was also in uniform, but in the US Navy uniform since he's in the service. Of course he was presented with an American Legion application.

A large cake, coffee, apple cider and soda were provided by Fuller-Taylor Post 915 in Central Square. We thank Commander Herb Pelton for his generosity. This is an annual event and it is sad that we can't have more Legion participation. We don't always appreciate the good teens.
Posted by VolneyVet at 8:21 PM