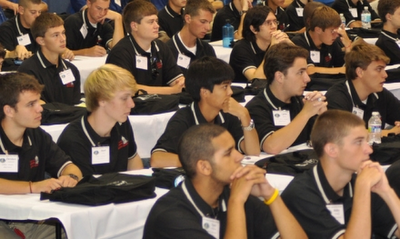 The 2012 American Legion Boys State programs have been under way for the past several weeks now, creating lifelong memories and friendships for thousands of young men. Many of those who experience the week-long event go on to serve our country as lawyers, politicians, news anchors and military servicemen. They too go on to share how the Boys State program left a lasting impression on their life by writing letters of gratitude, which was the case for Air Force Capt. Ryan Spodar.
Spodar, a 1997 American Legion Ohio Buckeye Boys State delegate and counselor for four years, wanted to wish the program staff another great year and express his gratefulness for the program’s existence. He did so by recently writing the following email to Buckeye Boys State Program Director Jerry White and Chief Counselor Grant Grace.

"Since I have spent the last 10 years of my life serving in the wars in Iraq and Afghanistan, I have a special perspective in seeing groups of people who have no concept of national identity or, sadly enough, even understanding the principles of democracy try and come together to form a peaceful nation free of cruelty and oppression. Being a direct witness to these attempts of nation building, I constantly remind myself of the work The American Legion does to prevent our nation from degenerating into the same state of languish.

"I want to make this exceedingly clear to you and your staff how important your work at BBS (Buckeye Boys State) means not only to me, but to the nation as a whole. A free and democratic state only exists so long as its citizens are educated and motivated enough to keep their government accountable to the citizens they serve. The work you all volunteer to do this year and in the future will educate the following generations of citizens as to how their government functions, how to keep them accountable, and how to replace them if they fail the people.

"My work here in the desert may catch a lot more attention in the news media, but be assured that your work is just as important as mine. You are working preventatively to secure a peaceful future where I am working retroactively to attempt a secure future. I believe it was General Patton who said something to the tune of, "a pint of sweat will save a gallon of blood." The work you do in BBS now will pay off in dividends later. Thank you all for your service then, your service now, and in the future."

Meanwhile, as The American Legion Alabama Boys State program currently celebrates its 75th anniversary, 1968 delegate and former Alabama state representative Steve Flowers shared his insight on the program and his experience running for Boys State governor.
"The American Legion and The American Legion Auxiliary sponsor one of finest programs for high school students in Alabama. Boys State and Girls State is an event every June. Rising seniors in high schools all over the state are invited to these week-long leadership confabs, which are held at major universities for the top high school leaders throughout the state. It is a lesson in civics and firsthand politics for these future leaders. The students are taught about government by practical experience.

"During their week at Girls and Boys State, they build city, county and state governments, and then they run them. They form political parties and run for every office. They draft and pass mock legislation. They culminate their week by visiting the State Capitol and Statehouse and running state government.

"This program has been going strong for over 60 years and many of Alabama’s past and current state leaders have been participants of Boys and Girls State. I had the opportunity to be a Boys State participant 44 years ago this June. It was a magnificent experience. I developed lifetime friendships from Boys State.

"As a teenager I was already involved with politics and had been active in several high school political endeavors. My high school principal told me earlier in the school year that I would be chosen to attend Boys State so it gave me ample time to plan to run for state office. I decided to run for governor. As might be expected with aspiring young high school politicos from all over the state by the time that Boys State began in June there were 27 of us running for governor.

"My best state political buddy was a fellow from Auburn. He and I had been to numerous political leadership meetings together. We were both running for governor and as young politicians we were already cutting backroom deals. We were both presumptuous enough to assume that one of us, if not both, would be one of the top two vote getters and therefore be in the runoff. We agreed we would endorse the other in the runoff against any third interloper who might make the runoff against either of us. Much to our chagrin, neither one of us made the runoff. I finished third and he ran fifth."

Our NY State Boys State and Girls State are identical in nature to the above examples. And comments are always in praise of the program.
Posted by VolneyVet at 3:00 PM