VA regional offices shut down
Because of the continuing government shutdown, VA closes all
public services at its regional offices
WASHINGTON (Oct. 8, 2013) -- The Department of Veterans Affairs (VA) has announced it is placing more than 7,000 employees on furlough, effective Oct. 8, a move that will eliminate public access to all 56 of its Veterans Benefits Administration (VBA) regional offices.
As a result of the furloughs, VBA can no longer conduct personal interviews and hearings, process GI Bill benefits, offer educational or vocational counseling, or provide outreach activities and programs -- including VetSuccess on Campus. The reduced work force also means that American Legion service officers are unable to use office space allocated to them at the regional offices.
Daniel M. Dellinger, national commander of The American Legion, expressed outrage at the latest impact of the government shutdown on veterans. “Because Congress and the White House refuse to speak to each other, our country’s veterans are suffering more with each passing day of this extremely dangerous impasse.
“Now we’ve reached the point where VA can’t even process benefits claims for our men and women who served in uniform. Our nation’s leaders need a reality check. Do they really think they are serving the best interests of our veterans -- or the best interests of all Americans -- by forcing government agencies to shut down?”
On Oct. 4, Dellinger held a press conference at the World War II Memorial in Washington, a memorial that was initially closed to World War II veterans and is still closed to the public. He told reporters that the House of Representatives, the Senate and President Obama were all to blame for the shutdown.
Besides the 7,000 VBA workers furloughed, VA has also placed more than 2,700 OIT workers on furlough. This means that all development of VA software has ceased, including work on the Veterans Benefits Management System, which VA Secretary Eric Shinseki has repeatedly identified as a key component to eliminating the claims backlog.
In a statement, VA said claims processing will continue until funding is exhausted, “which is projected to happen in late October.” Mandatory overtime for claims processors, scheduled to continue until Nov. 16, has also been abruptly halted.
VA employees who staff the department’s compensation and pension call centers are still on the job. Veterans who want to file benefits claims or check on a claim’s status can still do so by calling (800) 827-1000.
VBA also announced it will no longer be able to respond to congressional inquiries until appropriations have been restored.
Secretary Shinseki is scheduled to testify Oct. 9 at a House Committee on Veterans’ Affairs hearing that will examine the impact of the current government shutdown on VA operations.
-30-
Contacts: Marty Callaghan: 202-263-5758/202-215-8644, mcallaghan@legion.org or Craig Roberts: 202-263-2982/202-406-0887, croberts@legion.org. A high resolution photo of Nat. Cmdr. Dellinger is available at www.legion.org. 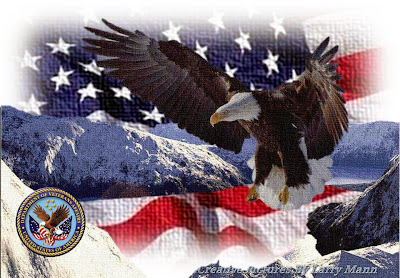 Posted by VolneyVet at 11:38 AM No comments: 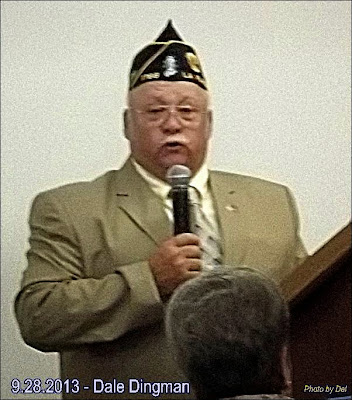 A homecoming dinner for Past Department Vice Commander for the 5th and 6th Districts DALE DINGMAN was held at his home post - Klock-Smith Post 1788 in Lafargeville, NY.

Several district officers from both the 5th and 6th districts were represented, including past 5th district commander Bill Park. Also present was the past department president Sally Johnston and her husband. 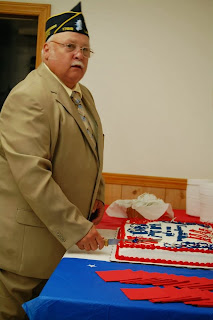 A delicious meal of roast beef and ham with mashed potatoes, gravy, corn and rolls was served by the post and auxiliary. A nice cake was the dessert of the day.

Dale received many fine gifts from those who appreciated his service to The American Legion. 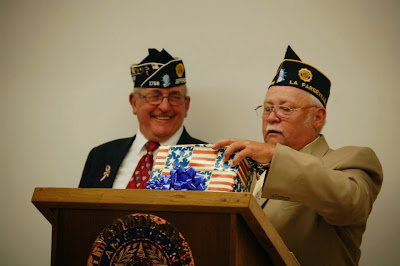 Dale was wary of something popping out of the gift box. But all seemed fine as he unwrapped the paper. 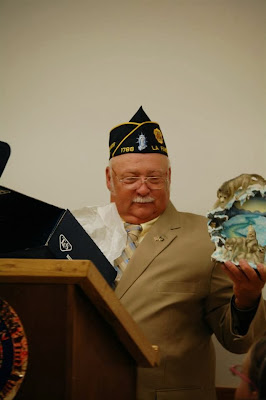 (Personal Comment: I have known Dale and his wife, Bonnie, for many years and there is not a single Legionnaire who is more dedicated and honest than Dale. He always tells it like it is and if he doesn't know the answer, he will find out what the answer is. A true "service before self" type of person and he deserves this tribute to his American Legion service. Thanks, Dale.) PDC Delos Rowlee


Posted by VolneyVet at 4:18 PM No comments:

NYALPA RECOGNITION :
Once again my little newsletter brought another plaque for us from the New York American Legion Press Association. I didn't even know it was coming, really. Just had an invitation to the luncheon at department convention and Betty and I went to it. Then there were the awards and I got one! So there were pictures and then election of new officers for this year. Mike Duggan has done an exceptional job in organizing and keeping the organization going. This is the plaque I got for the county: 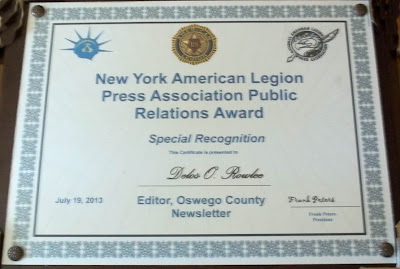 Then when the Summer Edition of "The Voice", the NYALPA quarterly newsletter came out, guess who's picture was on the front page? None other than yours truly. (Spoiled the whole front page!) 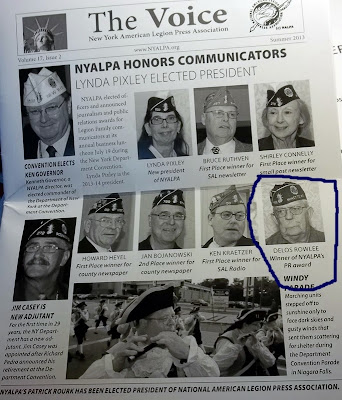 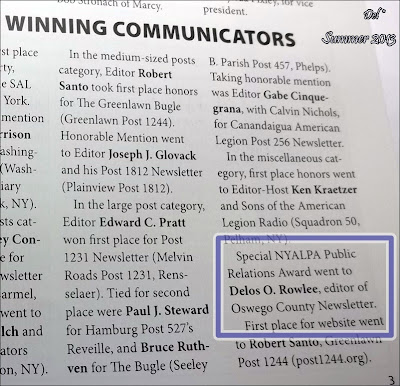 Posted by VolneyVet at 1:10 PM No comments: 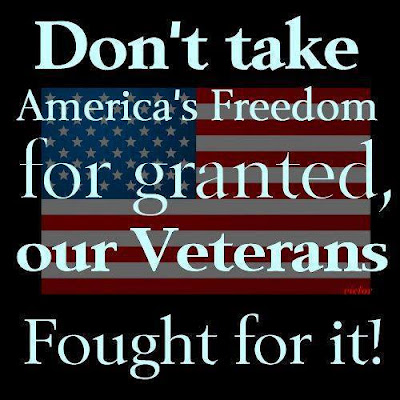 The American Legion has launched a new Suicide Prevention Web Center on its national website to provide veterans and their families with life-saving resources and programs during their time of transition and need. The center debuts at a time when suicide rates for U.S. veterans are among the highest – an estimated 20 veterans commit suicide every day.

Additionally, information on VA’s Crisis Hotline (800)-273-8255 (TALK), chat service and video testimonials from VA’s Make the Connection program are accessible from the website. The Make the Connection program includes personal stories of veterans who were at risk for suicide, received help, and now they encourage other veterans to come forward and receive proper treatment.

For questions about the new Suicide Prevention Web Center or American Legion veterans health-care programs and initiatives, please contact The American Legion’s Veterans Affairs and Rehabilitation Division at var@legion.org or by phone at (202) 861-2700.

Posted by VolneyVet at 8:00 PM No comments:

GET YOUR FLAGS READY! 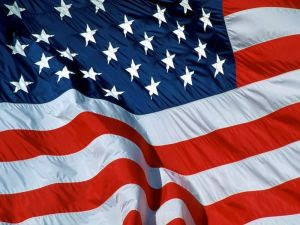 Please join us in this FLY THE FLAG.

On Wednesday, September 11th, 2013, an
American flag should be displayed outside every home, apartment,
car, truck, RV, office and store in the United States. Every
individual should make it their duty to display an American flag on
this TWELFTH anniversary of one of our country's worst tragedies. We do this in honor of those who lost their lives on 9/11, their families, friends and loved ones who continue to endure the pain and those who today, are fighting at home and abroad to preserve our cherished freedoms.

In the days, weeks and months following 9/11, our country was bathed in American flags as citizens mourned the incredible losses and stood shoulder-to-shoulder against terrorism. Sadly, those flags have all but disappeared. Our patriotism pulled us through some tough times and it shouldn't take another attack to galvanize us in solidarity.

Our American flag is the fabric of OUR country! Together, we
can prevail over terrorism of all kinds, foreign or domestic!!

(1) Take a moment to think back to how you felt on 9/11 and let those sentiments guide you.

(2) Fly an American flag of any size, on 9/11. Honestly, Americans should fly the flag year-round, but if you don't, then at least make it a priority on this day. (Even 'Dollar Stores' have nice flags, if you worry about cost!)

Thank you for your participation. Long may 'She' wave!! 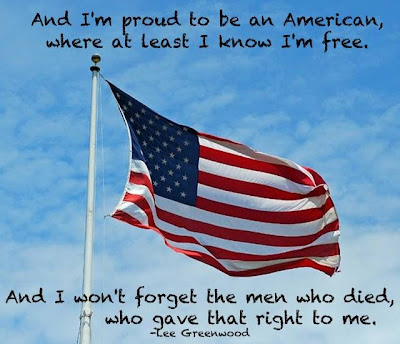 Posted by VolneyVet at 9:33 PM No comments: 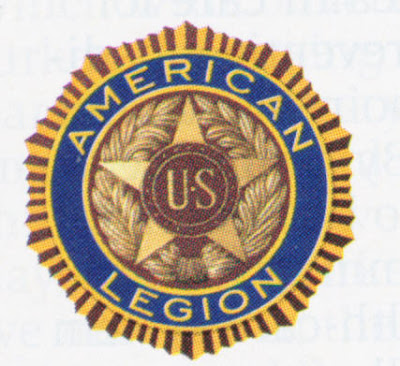 Across America, posts are encouraged to obtain a proclamation making September 16, “American Legion Day,” signed by the city or town mayor/manager. Departments can obtain a similar document from their governor.

Invite the media to cover post events that celebrate and highlight your post’s programs and the Four Pillars of The American Legion. A post open house, charity fundraiser, disaster preparedness demonstration/lecture, 5k American Legion Run for the Legacy Scholarship Fund, or other community awareness activity on American Legion Day will enable the community to recognize and support your post’s service.

In keeping with the theme, events should be family friendly with invitations to the local military community including active duty, Reserve and National Guard members and their families. 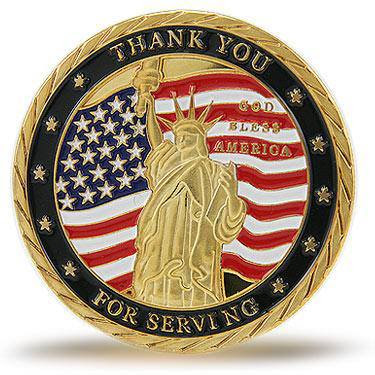 Read more »
Posted by VolneyVet at 9:16 PM No comments:


The American Legion Auxiliary Unit 601 of Parish, NY, will present a Chicken BBQ on Saturday, OCTOBER 12 at the post on County Route 69A from 12 noon until they are gone. Whole chickens are ONLY $7.00. Sides include baked beans and macaroni salad.

There will also be a Bake Sale with pies, cookies, brownies, etc. 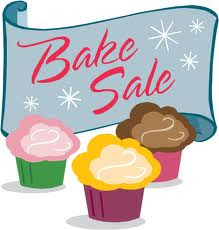 There may also be raffles.
Come on out and support the local
auxiliary unit in Parish, NY.
Mark your calendars:
October 12 at noon!

Posted by VolneyVet at 7:17 PM No comments: