on Sunday, July 7th the day of

the big 4th of July parade.

We will have food but doing it

from inside the club this year.

We will have our usual

Posted by VolneyVet at 1:03 PM No comments:


At a time when the divide between the military and civilian world has never been greater, the words of Marine Gen. John Kelly have helped bridge the gap.

He didn't set out to be a spokesman.

A former enlisted infantryman, Kelly rose to a four-star rank over a nearly 40-year career leading Marines, including many months in combat.

He had two sons who followed him into the Marine Corps. One, 1st Lt. Robert Michael Kelly, 29, was killed in Afghanistan in 2010 while leading a patrol in Sangin, at the time a hotly contested piece of terrain in Helmand province.

Since then, the elder Kelly has resisted media efforts to make the story about him or his loss. But he has made a number of speeches to Marines, families and other groups.

His words have resonated, touching on themes that rarely get a wide airing. His talks have gone viral, earning him a broad following. "It extends beyond the Marine community," said Marine Col. Chris Hughes.

Only days after he learned of his son's death, Kelly kept a commitment to give a speech to the Semper Fi Society of St. Louis in November 2010.

It "would become one of the most memorable moments in the lives of everyone in the room," according to the organization's website.

In the speech, Kelly addressed a familiar theme: How only 1% of the nation has shouldered most of the burden of the wars in Iraq and Afghanistan.

But he went on to say voicing support for the troops alone is insufficient, suggesting that those sentiments can sometimes bleed into condescension.

"If anyone thinks you can somehow thank them for their service and not support the cause for which they fight –- America's survival -- then these people are lying to themselves and rationalizing away something in their own lives, but more importantly they are slighting our warriors and mocking their commitment to this nation," Kelly said.

Thousands have been killed or injured in the wars, but they are not victims, Kelly said.

"The chattering class and all those who doubt America's intentions, and resolve, endeavor to make them and their families out to be victims, but they are wrong," Kelly wrote in prepared remarks for the speech. "We who have served and are serving refuse their sympathy."

Kelly went on to speak not about his own loss, but about two Marines who were killed while stopping a suicide bomber in Iraq. Instead of running when it raced toward them, the Marines opened fire, saving 150 of their American and Iraqi colleagues inside a base.

For Cindy Kruger, whose son Sgt. Michael Hardegree died in Iraq, Kelly's ability to make a major speech so soon after learning of his son's death was an inspiration.

"For most of us it would be years before we could do that," she said.

Those who know him say the remarks are in keeping with long-held beliefs and he doesn't relish being thrust into the public spotlight.

"Service is a privilege," said Marine Brig. Gen. Eric Smith, who has served with Kelly. "That's what he's talking about. We don't want your sympathy at all. We're not saying that in a negative way. We're just saying you may not understand why we're doing what we're doing."

Earlier this month Kelly spoke at the dedication of a memorial to 5th Marines, the unit his son was fighting with when he was killed.
Kelly said he struggled with the question of whether any cause was noble enough to justify losing a son.

"I realized the question was not mine to ask or to answer," he said. "It didn't matter what I thought. Only what he thought. The answer was his to give. He gave it by his actions that day, by the entire life that brought him to the instant he was lost."

"That is the answer to all of my questions," Kelly said. "I need nothing else."

Posted by VolneyVet at 9:21 PM No comments:

My son CWO-2 Nathan Wllis is a Wounded Warrior, still at Walter Reed National Medical Center and will be for at least another month. He has Wegeners' syndrome.

He is a member of Russell-Tryon Post 1435, Altmar, NY. He needs to have 7 Plasma replacements which takes 24 donors to get.

Just received this e-mail from Jim a few minutes ago.
Let's keep Nathan and his family in our prayers and we hope God heals him and makes him whole again.

God bless all our service people.

Posted by VolneyVet at 11:17 AM No comments: 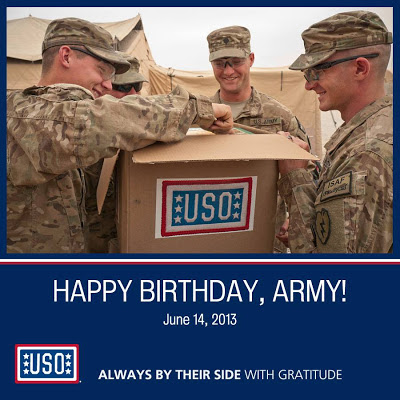 Posted by VolneyVet at 9:10 PM No comments:

My Name is America

My Name is America - New Song! 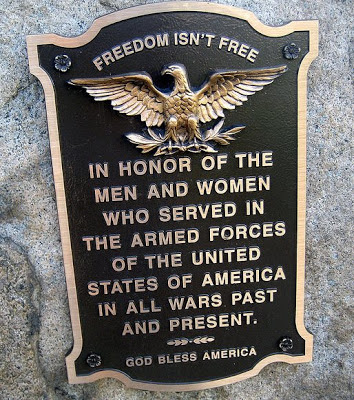 WOW---what a fantastic song and video------gotta make you proud to be an American!!

KEEP THIS ONE MOVING THROUGH OUT OUR COUNTRY!!!!!

Posted by VolneyVet at 4:24 PM No comments: 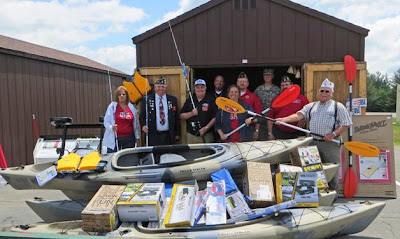 The American Legion's Operation Comfort Warriors donated more than $5,200 worth of kayaking and fishing equipment to the warrior transition unit at Fort Drum, N.Y. (Photo by Henry Howard)


In Tim Adams’ first six months as coordinator of the military adaptive sports program at Fort Drum, N.Y., he has seen how donations can change the lives of wounded soldiers.

As members of The American Legion Family dropped off more than $5,200 worth of donated goods to the adaptive sports program at Fort Drum on June 12, Adams recalled one of his favorite success stories.

"There is a gentleman who was severely wounded over in Afghanistan and came back and was having a hard time with things," said Adams, whose first experience with the Fort Drum Warrior Transition Unit was when he returned from war as a wounded warrior. "(The soldier) got involved through curiosity with our scuba program. The equipment used was from outside donors, from The American Legion and others."

While the individual soldier will continue to have difficulties health-wise, Adams said, he is flourishing with his newly developed skill. "Now he is a member of the community of Watertown, and he is a member of the STAR team (Special Tactics And Responses) of the Sheriff’s Department in Jefferson County in Watertown."

He was successful "because we had a program with donated equipment, and he was curious and worked all the way through," Adams said. "We empowered him but he promoted himself up to the level of rescue diver. Now he is an integral part of search and rescue in Watertown."

The gifts donated by The American Legion's Operation Comfort Warriors program on June 12 included five sets of kayaks, paddles and personal flotation devices; as well as fishing equipment, such as poles and fully loaded tackle boxes.

"The Legion and other non-governmental organizations that do this stuff empower the soldier," Adams said. "I don’t do anything to empower the soldier. I help coordinate and conduct programs that are then sponsored, if you will, by the donation, the items that were bought."

As in most military communities, Fort Drum and the civilian population are closely bonded. John Konkol, a member of the nearby Alexandria Legion post, said such donations are an example of how Legion posts support the soldiers.

"This is an Army community. Without the Army, we don’t survive. We do everything we can to help them. I’m just a proud veteran myself," said Konkol, who served in the Navy from 1970 to 1984, then was in the Reserves until 1992. "I used to get packages and it was always fantastic to see the little things come to you."

The relationship is clearly a reciprocal one.

"We’re giving them all this sporting equipment," Konkol said. "The looks on their faces, the thanks and the gratitude. It’s just a great feeling."

Barbara Corker, the incoming Auxiliary president for the Department of New York, has chosen OCW as her program for the coming year. The reason, she says, is twofold: because she wanted to find a way to give back to veterans and 100 percent of donations go to help wounded warriors.

"It’s just a way of saying thank you for all they’ve sacrificed for us," Corker said. "They sign on the dotted line and they gave their all. And now it’s our turn to give back."

Posted by VolneyVet at 4:06 PM No comments: