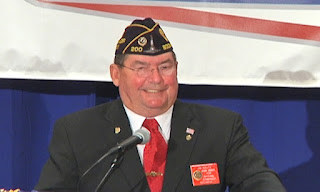 Veterans Day is observed on Nov. 11, but Legionnaire James Koutz believes one day a year is far from enough.

Koutz, a member of the Department of Indiana and the leading candidate for The American Legion’s 2012-2013 national commander, told attendees at the National Membership Workshop that every day is Veterans Day. In fact, that will be his slogan if he’s elected to the Legion’s top position during the upcoming national convention.

In front of more than 360 Legionnaires in Indianapolis on Aug. 4, Koutz laid out the membership plans he’d like the Legion to follow if he’s elected national commander.

Also, Koutz said that, if elected, he will institute a program in which Legionnaires are given a special certificate if they recruit one member from each of the Legion’s eligibility periods: World War II; the Korean War; the Vietnam War; the Gulf War and Lebanon/Grenada and Panama; and Operation Iraqi Freedom, Operation Enduring Freedom and Operation New Dawn.

Suggestions Koutz made during his presentation included:
• Having a direct-mail solicitation (DMS) chairman in every department;
• Focusing on women veterans, which could include establishing a women veterans chairperson in departments;
• Reaching out to members of Student Veterans of America, to both offer Legion services and recruit them as members;
• Paying closer attention to delinquent dues; and
• Advertising The American Legion by placing brochures in restaurants and hotel lobbies, and in rest stops, and by contacting billboard companies about placing Legion banners along highways and major roads.

Koutz said his fundraising focus will be the Legion’s Operation Comfort Warriors program, which ensures that patients at U.S. military hospitals and warrior transition units are given items like sweat suits, DVDs, puzzles, electronic devices, books, calling cards and more. OCW also provides larger items such as ping pong tables, entertainment centers, computers, kayaks and other recreational goods for use by wounded warriors in common areas.

Posted by VolneyVet at 2:07 PM No comments: