Despite the threat of rain and thunder showers,several members and their spouses and other residents showed up to attend this annual observance. 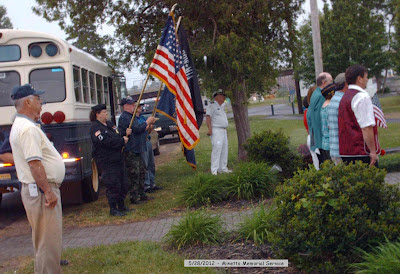 Shortly after 9:00 AM, the bus arrived with the group from Oswego who carry out this service for outlying regions. Commander A. Joseph Wallace was present as well as most of the Minetto Post 486 officers.

Despite our prayers, the rain came down and  wet down the service but it went on anyway and was well presented by the team. 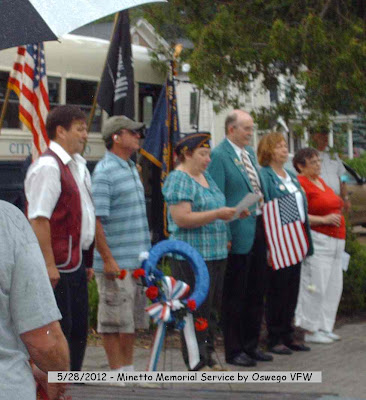 Prayers were given and flowers and a wreath were presented  with several readings followed by the playing of "Taps" on the bugle. It was a solemn time to remember those who have paid the ultimate price and given their lives in the defense of our great country. Surely we are proud and appreciate their sacrifice for our freedoms.


Posted by VolneyVet at 2:52 PM No comments: 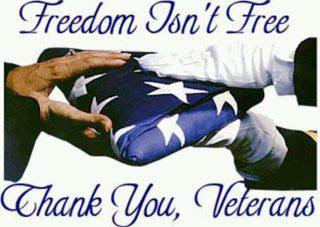 On Monday, people of all ages will observe Memorial Day, pausing to remember the sacrifices of men and women who died in service to our nation - a tradition begun in the Empire State 137 years ago by the residents of the Seneca County community of Waterloo.
It is a timeless legacy.
The tradition of honoring and remembering our fallen patriots was begun by our ancestors, who, in the aftermath of the darkest period in American history, took time out from their spring chores to place wild flowers on the graves of loved ones and neighbors, who gave their lives in the terrible Civil War that had divided our nation.
As we observe Memorial Day, we are in the midst of a new type of war in which, for the first time since the Civil War, the battle has been brought to American soil. The horrific terrorist attacks on September 11, 2001, scarred but did not weaken our nation. Rather, it served to galvanize Americans and our collective resolve to defeat those who seek to destroy us.
The great debt we owe to those who died for our nation and its principles can never be fully repaid. Memorial Day provides us an opportunity to give thanks to those who make the ultimate sacrifice out of love for their country, and reflect on the courage and selflessness of those who would give their lives so that others could live.
Memorial Day - or Decoration Day as it was originally called - is not a day of sorrow, but rather a time  for solemn reflection.
Whether at public ceremonies or in private over a loved one's grave, Memorial Day is an appropriate time to reflect on our country and those whose spirit, pride and courage have preserved our way of life, which we must never take for granted and leave unguarded.
More than a million men and women have died defending our nation and its principles of freedom and democracy, throughout our history. They did not go to war because they wanted to die. They went out of a sense of honor, duty and dedication to the cause of freedom - just as those who today willingly place themselves in harm's way in the war against terrorism.
Posted by VolneyVet at 3:46 PM No comments:

visited the Fifth District American Legion on Wednesday, April 11th in Herkimer County. A few (very few) of our Oswego County members attended this gala event. Here are a couple of pictures that were taken by the department photographer. 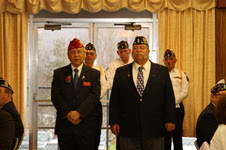 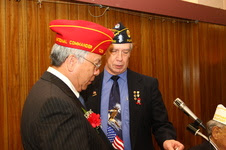 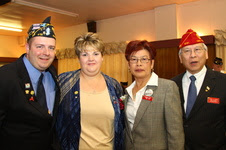 Posted by VolneyVet at 5:43 PM No comments: 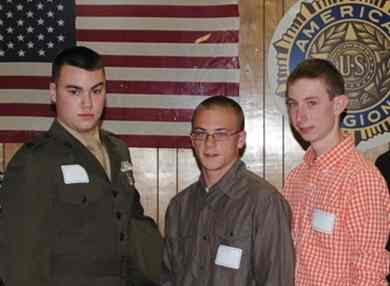 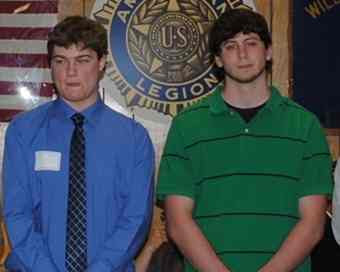 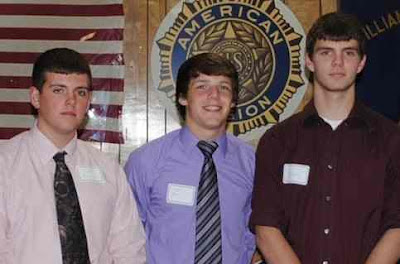 The Annual Girls/Boys State Dinner and Orientation was presented on Sunday at Wm. S. Monaghan Post 268 in Oswego with a fine turn-out of delegates for both 2011 and 2012 plus Auxiliary members, Legionnaires and a guest speaker.

The guest speaker was Barbara Goranson, who attended Girls State in 1983 from Raymond-Faulkner-Cook Auxiliary Unit 858. She spoke on her experiences in the program.

Girls attending this year's session are Jonmarie Favor and Molly Downing. Two girls from last year returned to tell of their impressions of Girls State. 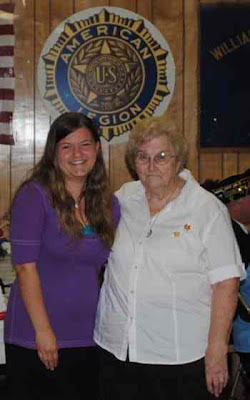 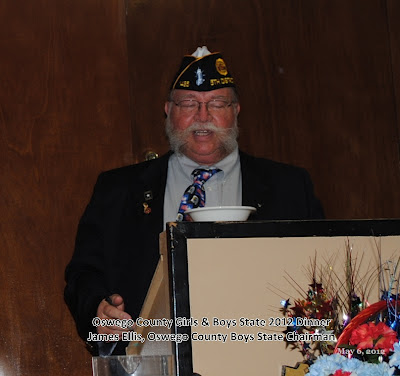 Posted by VolneyVet at 8:02 PM No comments:

1 MAR 12
The travel industry is promising to create nearly 3,000 jobs for veterans and military spouses by 2014 as part of a program announced Wednesday by Michelle Obama.


The first lady's office said the American Society of Travel Agents was creating a coalition to help veterans and military spouses get jobs in the travel industry and hang on to them as families are transferred to different military bases. Obama and Jill Biden, the wife of the vice president, are leading the Joining Forces campaign to encourage businesses, communities and others to support military families. The travel industry coalition includes companies such as Orbitz Worldwide, American Express Consumer Travel network, Amadeus North America, and a number of leading rental car companies.
Posted by VolneyVet at 10:14 PM No comments: 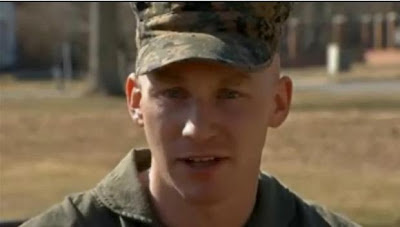 Marine who hit the jackpot on a penny slot in Las Vegas attributes his win to karma for donating bone marrow to someone in need.
"They asked me if I was sure I wanted to go through with it, because it's kind of painful, but what's a little pain if it will save someone's life?" Cpl. Alexander Degenhardt said, the Las Vegas Sun reported Sunday. "I look at this as kind of good karma for that."
Degenhardt won $2.8 million on the Money Vault Millionaires Seven slot at the Bellagio on Feb. 19, the Sun reported.
According to another story, the guy is planning on staying in the Marine Corps, which is awesome, because we always need a few good men and women like him. And unlike a majority of athletes and others suddenly flush with disposable income, it doesn't seem to have effected him much...
Degenhardt, who will receive about $100,000 a year over 20 years, said he plans to first help his pregnant sister and his mother catch up on bills.
He decided to buy some clothes after the jackpot – at a thrift store, where he buys all of his clothes. He said he won't part with his car that has rolled up some 250,000 miles, either.
"I plan to keep driving it until I can't anymore," he told the Sun. "No sense in wasting money. I'm really pretty thrifty."
For short video, click here
Posted by VolneyVet at 8:55 PM No comments: