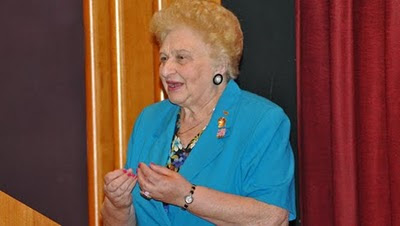 Holocaust survivor Nesse Godin tells her story to Boys Nation senators.
Photo by Charlie Tucker
On Thursday, Boys Nation senators climbed the steep road to Capitol Hill for a second time, as each young man was afforded the opportunity to meet and converse with their respective state senator, discussing everything from politics to baseball, and everyone walked away with memorable stories.

Patrick Samuels from Sheridan, Ind., and Ryan Byers from LaPorte, Ind., enjoyed their two-hour lunch with Indiana Sen. Richard Lugar; Tro Panosian from Scottsdale, Ariz., and Thomas Borns from Chandler, Ariz., caught a glimpse of  Arizona Sen. John McCain getting into an elevator and asked to jump on with him. He happily obliged, and even took a picture with the young men. Christian Chung from Fort Lauderdale, Fla., spoke with a four-star general along with Candy Crowley, host of ‘State of the Union' on CNN.

"Going into today I was told that you will never be ready for who you might see roaming the halls of the senate office or the Capitol," said Chung. "I met with congressman from both political ideologies and asked them a question about financial regulation and received two different answers. This was a great experience because you got to actually see valid points from both sides that you couldn't really contest. It was an eye-opening experience and just a great day."

After making it back to campus in the afternoon, drenched from the storm that suddenly came through, the senators quickly dried off, ate dinner and then were witness to a powerful presentation.

At 82 years old, Nesse Godin is a Holocaust survivor who currently lives in Sliver Spring, Md., with her husband, Jack. For the past few years, Nesse has brought her emotional, yet powerful, message to Boys Nation senators, whom she calls her 98 children. In speaking with the junior counselors who are past Boys Nation senators, Nesse was the highlight of their week back then and still is today.

Born in Siauliai, Lithuania, Nesse was only 13 years old when she knew the Holocaust affected her; she knew it was going on because she was forced to wear a yellow star to show identification as a ***** in public. "The penalty of not wearing the star was death. So I wore the star hoping I would be free," Nesse said.

Eventually, the Gestapo and a young girl came to the Godin's apartment, bringing certificates that ordered Nesse's mom, father and two brothers to the ghetto, where they were placed in a confined area similar to a jail and fed little. As the Gestapo was searching the home for valuable possessions to confiscate, Nesse's mother pulled the young girl into the bedroom, begging her to give the family another certificate for Nesse or else she would be separated from them.

Nesse's mother paid the young girl to leave a certificate, and when the Gestapo left, there were five certificates. Had Nesse not received a certificate, her fate would have rested with the 3,500 people who perished in 15 synagogues.

By 1943, the trucks came to the ghetto to haul away her father to Auschwitz, and Nesse's mother said to her, "My child, the trucks are here. Trucks mean deportation. And deportation means separation of family." Soon thereafter, at 16 years old, Nesse was on a train to the Stutthof concentration camp and given the ID number 54015. When she arrived to camp, Nesse was stripped of her personal belongings and clothes, beaten and given a dress, a pair of shoes and underpants.

"Everything was taken from me except one thing - my name, Nesse Godin."

The older women at the Stutthof concentration camp took Nesse under their wings and provided encouragement, a huge part to her survival. She snuck into the labor camp line, an idea from the women so she wouldn't be put to death, and pinched her cheeks to look healthier and stood on her tip toes to look taller. Her labor involved digging trenches for enemy tanks to fall into.

Overall, Nesse endured the concentration camp, four labor camps and a bitterly cold death march in January 1945, during which time she saw mounds of skeletons and was one of 200 survivors out of the 1,000. During the death march, Nesse prayed to God that he would let her die because as a little girl, she couldn't suffer anymore. But it was the women that told her she had to survive because she had to tell her story and theirs.

Nesse was liberated by the Soviet Army in March 1945, weighing a mere 69 pounds. Unfortunately, her father didn't survive Auschwitz, but she was reunited with her mother and one brother before moving to the U.S. in 1950.

Her physical and mental wounds will always be a part of her, but Nesse has overcome the past by keeping her story alive. And as she knows the time will come when she can no longer tell her story, she asked the 98 Boys Nations senators a favor.

"Make a difference in this world, regardless of how we look, how we pray or where we come from," she said. "Keep the story of the Holocaust alive so it never happens again, because we cannot close our eyes when somebody is doing terrible things."
Posted by VolneyVet at 10:35 PM No comments: