It's not the most ideal way to spend a Christmas break for a 13-year-old. Waking up two hours before sunrise to run, do push ups, sit-ups, crunches and some exercises called steam engines and sun gods - all while someone yells at them.

That's what Justin Pomeroy did when he traveled to Camp Hickory Hills in Dickson, Tenn., for nine days of boot camp that's called "orientation" in the Navy League Cadet Corps.

"It was fun," said Pomeroy, who attends Central Baptist Academy. "It's challenging at times, but overall a good experience."

The American Legion in Anderson sponsors and supports the program of Sea Cadets that puts young students through military-style training one week a month and two weeks out of the year - much like Guard units.

Sea Cadets (Age 14-17) and League Cadets (11-13) dress in Navy dungarees and learn naval terms and structure like rank and recognition, flag etiquette, how to march, what it means to do PT (physical training) and other knowledge and skills necessary to be a squared-away sailor.

The cadets meet once a month in a classroom - mostly the American Legion Hall in Anderson - and sometimes they attend things like aviation shows and ship tours in Houston. Last weekend, Pomeroy and Bedias resident Desta Jordan studied different terms used on a ship, including port, starboard, fore, aft, bow and stern. They have dress uniforms for road trips and sometimes march in local parades.

There are only two active members in the current Sea Cadet program with the American Legion, but that hasn't deterred LCDR Gary Williamson, the Region 8-3 Director who's a member of the Anderson American Legion.

Becoming a new member is more than walking up and joining. Williamson said he wants a potential recruit to attend one weekend to participate in drills, marching and classes to see if they would want to join and continue the cadet program.

Pomeroy will turn 14 next week and become a Sea Cadet, meaning start with a fresh uniform and all the medals he earned as a League Cadet will now sit at home as he earns new medals. At his orientation in Tennessee, he earned the NLCC merit Ribbon, the Marksmanship Ribbon with an Expert "E" and he was a Plank Owner, meaning he was on an original unit and participated in that group. He will apply to attend a Sea Cadet boot camp this summer.

"This makes me want to keep on doing it and make my way up the ranks in the Sea Cadets," Pomeroy said.

He said military will most likely be in his future, but he's not quite sure his route. He wants to be a fighter pilot, but as a 6-foot-3 ninth grader who probably hasn't finished growing, he would probably most likely be suited for Blackhawks or other Naval aircraft. The path to get there could either go through a military academy or an ROTC unit in college. It could also either be Officer Candidate School after college or just straight to enlisted after high school.

He's already got a leg up, as his classes at League orientation included learning about different fields in the Navy like Sea and Air, different classes of ships, medical classes and military customs. He's stood watches, eaten bad chow, learned how to clean barracks, eaten good chow and dry chow, and learned how to fold socks, towels, shirts and even skivvies like most teenagers wouldn't even dream of.

"I got motivation and discipline out of it for sure," said Pomeroy, who answers questions with "yes sir" and "no sir." "And you learn to take the initiative to do something before you're told. And I made some good friends."

And it looks like the American legion is helping mold some good kids.

For more information on the Sea Cadets and league Cadets program, visit www.seacadets.org. McClusky Post No. 640 in Anderson still has spaces available for all future sailors and military people. 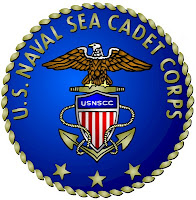 We have our own local group in Oswego, NY.


Check out the web site above for additional information on this youth program.
Posted by VolneyVet at 12:20 PM No comments: