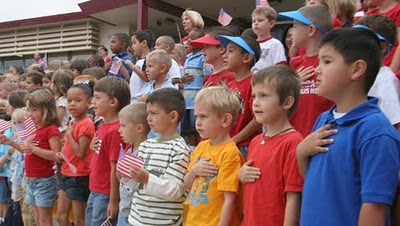 Pvt. Daniel Boothe, MCB Camp Pendleton
American Legion National Commander Clarence E. Hill characterized Thursday's ruling by the Ninth U.S. Circuit Court of Appeals that the phrase "under God" in the Pledge of Allegiance is constitutional as "a great victory for common sense."

In a separate ruling yesterday, the Court also upheld the use of the national motto "In God We Trust" on coins and currency.

"The American Legion was very critical, in fact outraged, when the same Court ruled in 2002 that the pledge was unconstitutional because of a phrase that has existed in the pledge since 1954," Hill said. "But it is time to give credit where it is due. The Ninth Circuit corrected its earlier mistake and now there is absolutely no reason why schools across the nation should not lead their students in reciting the Pledge of Allegiance every day."

The latest ruling answers the call of a resolution unanimously passed by delegates at The American Legion's 90th National Convention in 2008 that stated, "That The American Legion reiterate its continuing support for the Pledge of Allegiance in its current form, voicing opposition to any and all attempts to revise it beyond the version approved by Congress in 1954."

The California atheist who filed the complaint said he would appeal the ruling, a move that would once again put him at odds with The American Legion, which has filed numerous "friend of the court" briefs in support of the pledge.

"While this was an important victory in protecting American values, the pledge isn't the only great American institution under attack," Hill said. "Since 1989 it has been legal to desecrate the flag of the United States. The American Legion calls on Congress to pass a constitutional amendment that will allow Congress to protect the flag from desecration. Now that the pledge is legally protected, let's show Old Glory the same respect."

Hill also compared attacks on the pledge to legal attacks being waged by the ACLU and other groups against veterans memorials that they deem "religious."

"During this session the U.S. Supreme Court heard a case dealing with the constitutionality of a cross in the Mojave desert, which was erected as a war memorial," Hill said. "We hope that the U.S. Supreme Court rules that these are symbols of patriotism and not the establishment of a state religion. The vast majority of the American people are not offended by references to God. There is no reason why our legal system should be."

Posted by VolneyVet at 6:54 PM No comments: