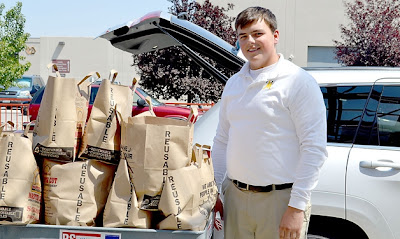 Jake Bayliss from Carson City, Nev., was one of 52 contestants who qualified to participate in the 2012 American Legion High School Oratorical Scholarship Program, “A Constitutional Speech Contest,” this past April in Indianapolis. Bayliss was thankful for the experience and wanted to pay it forward to those who afforded him the opportunity to participate in the contest and more – veterans.

Bayliss reached out Legion Post 12 in Reno, Nev.– his sponsor for the contest and for American Legion Nevada Boys State — in search of ways he could help veterans. He learned that the VA Sierra Nevada Health Care System in Reno was in need of personal hygiene items for its veterans. So Bayliss began a toiletries drive, which he too used as his Eagle Scout project.

“My toiletries drive began as a way I could somehow repay veterans for what they had given to me,” Bayliss said. “I feel very strongly that I would not have the opportunities that I have today without the veterans who fought for my rights and freedom. So my toiletries drive project was an extremely small price to pay in return for something as valuable as freedom.”

Bayliss received items for his toiletry kits by seeking donations from family, friends and local businesses. He received enough hygiene items such as shampoo, razors, toothpaste, toothbrushes and deodorant to fill 200 grocery bags.

“I received a significant amount of support when people heard that this was for veterans in need of assistance,” Bayliss said. “I believe that most people did not even know that this problem (lack of veteran hygiene items at Reno’s VA hospital) existed. My project was most effective at raising awareness for injustice, which far surpasses the 200 bags that I collected.”

Bayliss’ prepared oration for the Legion’s Oratorical Contest was titled, “The Reason for Treason, America’s Fight for Democracy,” which discussed the Articles of Confederation and the Compromises. He received a $1,500 scholarship for participating in the program’s quarterfinals.

“I have always been a history fanatic, so researching the process for creating our government was extremely interesting to me,” he said. “For example, we have been debating income tax for 99 years. However, they (America’s Founding Fathers) settled slavery, representation, federalism, government structure and rights in only four months.”

While his Eagle Scout project is over, Bayliss is continuing his toiletries drive as he believes his project “was most effective at spreading awareness.”

Although I will never truly be able to repay veterans, I am just ecstatic that I have the opportunity to give back to them in some way,” he said. “I believe that it is very important to repay veterans for what they have done for us.”

Posted by VolneyVet at 3:56 PM